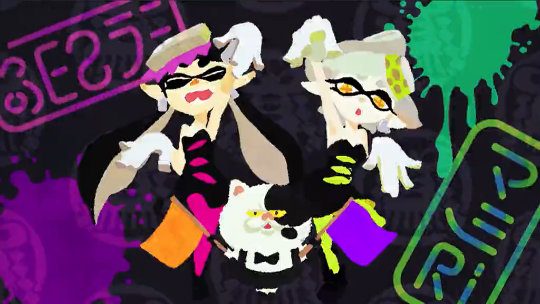 It’s splat or be splatted! Take to the turf for a brand new kind of battle in Splatoon, only on Wii U. Go up against players from around the globe in thrilling 4-vs-4 online multiplayer matches, where your teamwork and tactics need to be as sharp as your shooting.

Take control of an Inkling, a unique species capable of switching between human and squid forms, in this distinctive action shooter. Inklings can run, leap, and shoot while in human form, while as squid they can swiftly swim through their team’s ink. Use these talents to scale walls coated in your colours to reach high-up vantage points, lie in wait for unsuspecting players, or cook up devious strategies of your own!

Head online for good clean fun in the 4-vs-4 Turf War, where the aim is simple: claim as much territory as possible by coating it in your team’s colours! Whether you like to spray fast and loose or hang back to make sure nobody inks over your colours, players of all play styles and skill levels can contribute to their team’s result. For more intense competition, head to Ranked Battle, where you can take on a range of modes offering unique rules and ways to play. In Splat Zones, fight for control of a certain area of the stage, rather than the whole map.

However you like to play, remember the importance of tactics and working together with your teammates: it’s all about mind over splatter in this game. The Wii U GamePad provides everything an Inkling could need, right at its tentacle-tips: aim with total precision thanks to effortless and intuitive motion controls, and easily check the flow of battle with a glance at the GamePad touch screen. If a team-mate’s in trouble, tap their icon to fly straight over in support, quick as a splash!

Battle against the forces of the Octarian army in a single-player campaign mode, or go head-to-head with a friend in the local 1-on-1 Battle Dojo, where you compete to burst the most balloons. Both modes are perfect for polishing the skills you need to succeed online, so don’t underestimate the importance of proper practice!

Equip yourself with a main, sub and special weapon from a wide range of varied options. If you like to get up close and personal, the Splat Roller is perfect for covering large swathes of ground, while the Splattershot is the ultimate all-rounder. It’s not just what’s in your hands that affects how you play: purchase and equip clothes, hats and shoes that affect your character’s skills, so you can tailor your clothing to suit your own personal play style.

A free software update, out now, lets you put together private matches between you and your friends, so you can really sort out who's the ultimate Inkling! You can also join with friends to tackle Ranked Battles, shoot for higher levels and ranks, enjoy new music, and much more! Find out what's new in Splatoon v2.0.0!

This game may contain product placement and advertisement.

When you touch an Inkling amiibo to the GamePad, you’ll receive missions based on the amiibo you scanned. By completing these missions, you can acquire special weapons and gear you can only get from these compatible amiibo.

Find out more about amiibo at our amiibo website.

Bring a splash of colour to your desktop with these bold Splatoon wallpapers!

Want to get ahead in the world of Splatoon? Put these tips into practice and you’ll be squidding your way to the top of the pile in no time!

Work as a team

Every Inkling out there has his or her own play style, whether it’s defending key areas or pushing forward into enemy territory. But you’re not just out for yourself: a team needs balance to win! If you like to attack, check the Wii U GamePad every so often to see if your teammates are in need of extra firepower, and tap their icon to Super Jump over and splash down in support. If you find yourself with a great opportunity to cover a lot of ground quickly, press up on the +Control Pad to signal to your teammates that it’s open season!

The maps on offer rotate every four hours, and new maps are added regularly, so there’s every chance you’ll be faced with an unfamiliar map. No problem! Enter the Lobby, and press the Y Button to do a little reconnaissance by playing the map on your own – perfect for finding prime vantage points, identifying bottlenecks to defend, and generally learning the lie of the land.

Only ink on the ground counts towards the final results, but as you can swim up inked walls to reach advantageous positions, covering upright surfaces can absolutely turn the tide of battle in your favour. Keep your eyes peeled for opportunities to ink and climb: the pipes to either side of Saltspray Rig’s lifts can be ascended, and many other maps contain boxes, ramps, walls and other vertical surfaces just waiting to be scaled. And of course, if you spot an opponent swimming up a surface, aim your ink above them to cut off their ascent, leaving them a sitting duck!

Each Inkling goes into battle equipped with a weapon set, consisting of a Main, Sub, and Special weapon, with new weapon sets unlocked as you gain more experience and increase your level in online battles. However, there are several unique weapon sets that cannot be unlocked in online play alone. Rumour has it they’re connected to special blueprints that can be won back by defeating giant Octarian weapons in Octo Valley. When you unlock a new weapon, spend a few minutes in the training area putting it through its paces – it could be the perfect fit for your established play style, or open up new strategies and ideas!

Your headgear, clothes and shoes all offer helpful abilities that can help support your play style, whether activating unique abilities or increasing your natural capabilities. Matching these abilities to your equipment is crucial: Ink Saver (Main) reduces the amount of ink your main weapon uses, so pairs well with Roller weapons, or Shooter types with high rates of fire. Wearing the right outfit goes a long way to putting you on the path to victory!

Which Squid Sister are you?

Take our personality quiz and find out if you should join Team Callie or Team Marie!