Get support for your Nintendo systems, software and services

While the system transfer process is very simple, it's important to understand what will happen to the original Nintendo 3DS that you're transferring from (the source) and the new Nintendo 3DS that you're transferring to (the target) during the process itself. Please read the following information, and consult our system transfer FAQ for further information, should you need it.

Important notice regarding the system transfer: 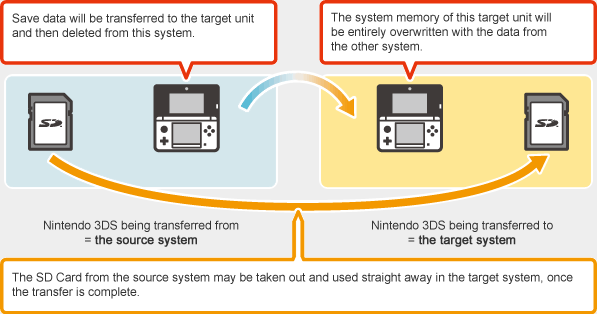 During the transfer, data that is saved on the target unit's system memory is deleted entirely, and is replaced by the source system's data. If there are photographs or audio data saved to the target system's memory, please copy these to an SD Card prior to performing the system transfer.

Both Internet communication and local wireless communication are used during the transfer process. Please ensure that you perform this process in a location where both Nintendo 3DS systems can be placed near to each other and where they may both access the Internet.