1. Unprecedenced Use of the Latest Technology

"With the final model of Wii in front of me, I cannot help but think, “This could not have been accomplished if we had tried to make a new game console in the conventional manner.” Why is Wii the way it is? What kind of idea was the basis for the development of Wii? I hope I can deliver the answers to these questions with this series of interviews. First of all, I would like to ask some questions to Mr Takeda, who has overseen and coordinated the entire project. How did you feel when you had the initial idea to develop this kind of console? And what are your impressions as you look upon Wii in its completed state?"

We started developing Wii right after Nintendo launched the GameCube. You know, as soon as we complete one system, we start thinking about the next one. Needless to say, we don’t design new components or technologies from scratch. Rather, we have to base our designs on existing technologies. In the world of technology, there are so-called Roadmaps (overviews of proposed technologies/products) that are used by each industry in order to make general forecasts about where semiconductor technology is heading, as well as the evolution of disc and wireless technologies. Engineers and developers normally refer to these Roadmaps while developing hardware that they plan to release in the future. Looking again at the completed Wii, I feel that it has turned out to be something completely different from what was predicted in the mainstream technology Roadmaps.

What gives you that impression?

This may sound paradoxical, but if we had followed the existing Roadmaps we would have aimed to make it “faster and flashier.” In other words, we would have tried to improve the speed at which it displays stunning graphics. But we could not help but ask ourselves, “How big an impact would that direction really have on our customers?” During development, we came to realise the sheer inefficiency of this path when we compared the hardships and costs of development against any new experiences that might be had by our customers. 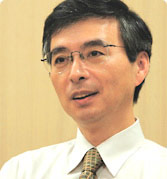 When did you start feeling that way?

It must have been about a year after we started developing Wii. After speaking with Nintendo’s development partners, I became keenly aware of the fact that there is no end to the desire of those who just want more. Give them one, they ask for two. Give them two, and next time they will ask for five instead of three. Then they want ten, thirty, a hundred, their desire growing exponentially. Giving in to this will lead us nowhere in the end. I started to feel unsure about following that path about a year into development.

OK, now I would like to ask some more detailed questions to Mr Shiota, who has been in charge of the technological aspects of Wii. First of all, briefly tell me what you have been working on.

Well, I was in charge of Wii semiconductor development. Of course, Nintendo doesn’t develop semiconductors by itself, so I worked on developing them with our business partners.

The development of semiconductors can be one of the most important factors in determining the performance of new systems. What were you originally expecting during the initial development phase, and what has turned out to be different in the end?

At the risk of oversimplifying, I would say that the technologies that form the basis of all semiconductors are not that different from each other. On the other hand, how these fundamental technologies are applied depends on the device itself. Wii takes full advantage of state-of-the-art semiconductor technologies, but its application of them differs greatly from that of other devices. So, while the fact that we are using state-of-the-art semiconductor technology does not differ from my original expectations, the way in which we are using them has turned out to be very different.

Could you be more specific?

Mr Takeda also mentioned this, but normally when you decide to use new semiconductor technology, you do so solely for the sake of more extravagance and higher performance. In the case of the CPU, you try to progressively improve its processing power, which in turn raises its power consumption and increases its size. Sophisticated semiconductor technology is required to realise this goal. While you could use such cutting-edge semiconductor technology in order to facilitate this kind of extravagance, you can choose to apply this technology in other ways, such as making chips smaller. We have utilised the technology in this way so that we could minimise the power consumption of Wii. If the chip becomes smaller, we can make the size of the console smaller. With a smaller chip and minimised power consumption, Wii can be left on 24 hours a day. This is what I meant when I said that the way Wii makes use of state-of-the-art technologies is completely different from the way in which they are used in other devices. 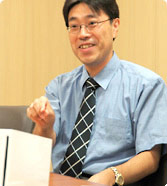 In general, no engineer hates higher performance. As an engineer, didn’t you experience any inner conflict when it was decided that we would not necessarily take Wii in the direction of sheer horsepower alone?

Yes, there was some conflict. To be honest, I even felt quite anxious about it. After all, it takes a lot of courage to divert from the Roadmaps. I was especially concerned when it was still not very clear to me what could be done with such a machine. The hurdle of reducing power consumption could be overcome. We were certain that we could achieve this goal in the early stages of development. But the conflict and concern did not go away until it was clear how this would change the gaming experience. Once the concept of Wii as “a console where something new happens every day” became clear, we were certain that we had made the right choice. This concept is made possible by the fact that Wii can stay on for 24 hours a day.

Looking back at all the development history of Wii, were there any particularly memorable turning points?

Let’s see. When we were struggling to reduce the power consumption, there was a point in time when we simulated how power consumption would change in existing devices if we applied cutting-edge semiconductor technology to them. In the case of the GameCube, we discovered that the power consumption could be reduced to between one-third and one-quarter of the consumption of the GameCube's semiconductors. I was really impressed with these results. Of course, I was surprised by the data itself, but it was also the moment at which I was struck by the originality of Nintendo. Normally, when making new devices, companies compete with each other on the basis of “How much faster is the CPU, how much more memory is there, and how many more polygons can be displayed?” But Nintendo posed the question “How much can we decrease power consumption and maintain performance?

Why do you think we were able to engage in that kind of argument?

Above all, I think it must have been because Nintendo is always trying to do something new and different. This message has been spread not only within Nintendo, but to other companies as well. As a result, our development partners have naturally tended to present us with new technologies and ideas. It was this background of going against the norm that gave birth to Wii.

Of course, the issue of performance was not secondary. Anyone can realise “low performance with low power.” Others tend to aim for “high performance with high power.” With Wii however, Nintendo alone has pursued “high performance with low power consumption.” So, while Wii embraces cutting-edge technology and high performance, the direction it is aiming in is completely different from that of previous systems. When we look at the automobile industry, not every car is following the same evolutionary course. While some are trying to make faster cars, others are gathering public attention around the world with their hybrid engines. If automobiles can be used a metaphor, our industry has always been trying to compete over horsepower, even though not all cars are made to compete in F1 races.

Just as hybrid cars have created a new emphasis on “environmental performance,” I believe that Wii has also discovered new values. Having said that, however, Nintendo has never shied away from technological competition. On the contrary, we have integrated a number of highly technological elements into Wii.

Using state-of-the-art technology in unprecedented ways is far more complex, difficult, and requires more technological know-how than simply using the technology to improve performance. The Wii system is far more complex than that of the Nintendo 64 and GameCube. Furthermore, since Wii is compatible with GameCube software, we have not only tried to create something new, but we have also retained some of the old functionality. Honestly, this was not an easy task, but I think we can proudly present to the world a new console that will have so much appeal for so many.