9. One Philosophy benefits from another

The image of Wii in the lead-up to its launch has been shaped by the fact that most of the attention is being given to games that can also be easily enjoyed by non-gamers, typified by the Wii Sports package. That's partly due to the fact that Nintendo's primary goal is the expansion of the gamer population. However, that doesn't mean in the least that Nintendo feels the games most enjoyed by our core fans like Zelda aren't important anymore. Quite the contrary - our ambitious plan was to create and launch the ultimate traditional gamer's game at the same time as Wii, a console designed to expand the gamer population. Did the co-existence of these seemingly disparate goals in the company ever make it hard for you to continue with the lengthy development of Zelda, or make you question the value of your work to the company? This is actually a question that I didn't ask the other developers. 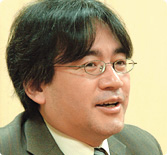 You didn't? I would've liked to hear their comments. Well, hmm...let's see. This might not be the best way to put it, but at the beginning of development, we started work on Twilight Princess with the intention of helping the GameCube go out in style. Put another way, we wanted to proceed straight ahead within the framework of traditional gaming and make a game that would really blow people away. Our focus was clearly different from that of Wii, which was designed to be easy to play and to be something everyone can enjoy. However, I think the fact that this Zelda can be played on Wii helps build a number of bridges. It will provide a chance for people who bought Wii for the simple and intuitive controls to see how much fun traditional games can be. At the same time, for people who like traditional games and are harbouring some doubts about Wii games, or who have already decided that Wii is not for them, Zelda might become a gateway for them to see how much fun Wii is.

But what about the state of mind of the internal staff members? A few years ago, for example, the Zelda team was considered to be the top development team within Nintendo. Of course the various development teams in the company weren't ranked, but it would be fair to say that the Zelda team represented the whole company. But then the Nintendo DS came along and its simple and fun games were huge hits. We became able to keep putting out great games without investing a lot of people or time in development.

In the context of this new climate, when Zelda became the biggest project in the company, some people started to say half-jokingly: "We could probably make five other new games if we didn't have Zelda." It would be going too far to say that making this kind of huge game is somehow obsolete, but there are trends even within parts of Nintendo to move away from this approach. During development, wasn't there any sense of melancholy in the team, a feeling that the days of enormous projects like this were numbered?

Let me think about it for a moment...... No, I don't think there was anything like that. The feeling in the team was more like: the DS is the DS, Wii is Wii, and more importantly for us, Zelda is Zelda.

So no one was worried about being left behind?

Well, I'm sure some people felt that way. We were continuing to do what we've always done in the midst of a change of direction within Nintendo, so I would be lying if I said that no one was worried about being left behind. When we missed our window of opportunity to help the GameCube go out in style and it was decided to also make a Wii version, things got a little chaotic. But despite that, no one ever said anything like: "We shouldn't be spending time on making Zelda anymore." No matter how much trends in the industry were changing, we had absolute and unwavering confidence in what we were making. 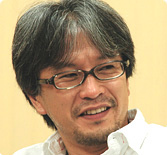 I'm sure that you wouldn't have been able to create a Zelda like this if you'd felt that this kind of big project was becoming a thing of the past. So as you said, I don't think people in the development team were concerned by this. Or if they were, it was in the sense that the company's new direction acted to motivate them.

Yes, I think it probably helped motivate the team.

I think there is value in the mentality that was brought about by the success of the Nintendo DS, namely that it is possible to create a good product without investing a huge amount of time or resources. On the other hand, making games like Twilight Princess is also important because it gives us a chance to impress players with what we can do when we devote a talented team of people to making a single game over a long period of time. I also think each philosophy benefits from the existence of the other. I think that without either one of them, the resulting lack of variety would be unhealthy.

As do I. Since I've only worked on large, epic games before, I realise that I'll need to start thinking about things from a slightly different point of view from now on. I think that all of the other staff are becoming aware of the need to do this, too. While we don't have any regrets whatsoever about how this Zelda has turned out, the next time we are deciding what kind of game to make, I think the differences between these two philosophies will become a constructive topic for debate.