3. A Tool To Communicate Feelings

Earlier, when Takeda-san talked about wanting to put in an element of play, you addressed that by adding a feature where during Wii U Chat, you can draw pictures and write letters using the touch screen of the Wii U GamePad.

Yes. We wanted something you could do while you were chatting to make conversations more fun. You can use the Wii U GamePad to draw and write, so this was an idea that kind of came up naturally. It’s actually a lot more fun than you’d think. You’re not often able to doodle on someone’s face in real life, but you might have the urge to try. When we tried it, it broke the ice and spurred conversation. Normally you can never doodle on your boss’s face, but we were able to do so during development. In fact, when you’re doodled on, it actually makes you happy.

It makes me excited thinking about cases when a grandparent would use it with his or her grandchild. Did this feature take shape as it is now from the beginning?

Actually, at first we wanted to make a simple whiteboard feature. You would press a button to switch modes to have the whiteboard appear on the TV screen, where both users could draw pictures on it as they liked. But when we tested it, because there was a white screen in front of you it was a bit much for customers who weren’t confident in their drawing skills, and then even more so because you were being put on the spot by the other end watching you.Also, you would be able to express more if there were more colours and pen types, but people became too preoccupied with drawing, which slowed down the conversation. Interaction with the other side lessened, and the sense of being together got thinned down where you felt uncomfortable and not able to look at the others’ expressions.

Oh, that would be the opposite of “family happiness”.

It was. Conversely, by placing an image in the background in advance, the pressure of feeling like you’re forced to draw something lessened than when a whiteboard was shoved in front of your face. Some people were of the opinion that it sounded difficult to draw on top of a moving image, but when we tried it out, we found all sorts of amusing things to do with it, like have the person move along with what you were drawing.

With the way it is now, it feels like you’re really able to really express your true feelings that maybe you might be a little embarrassed to put into words and speak out.

Yeah, even if it’s just a ‘thank you’, we learned from experience that it gets across to the recipient differently whether you communicate through your voice and expressions, versus your handwriting and expressions. During development, when we were in a serious conversation with NLG, it became difficult to cut in while someone was talking. But by doodling quick snippets of something on the screen by hand, people were able to become more forgiving if you wanted to interrupt. This was something that actually happened. 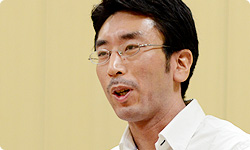 When you draw, the line glows a bit and seems to be a little hazy. Why did you decide to make it that way?

That was Kitai-san’s idea. At first it was an ordinary flat line, but I requested that it needed to be visible on every kind of background and that’s what she came up with. Strangely enough, it’s always clearly visible.

Oh, is that so? I actually thought, “This pen shows up so well against a real image.” The generation that grew up with print clubs* have a different way of thinking.* Editor’s note: ”Print clubs – known as “purikura” in Japan – refers to instant photo booths that have been widely popular in Japan since the mid-1990s, especially among girls. As opposed to a standard photo booth, these “print club” booths allow users to take photos and personalise them with a built-in software to add things like fancy frames, fluorescent handwriting messages and cute stamps before the photos are printed out.

Kitai-san really understands just how a colour combination will look in a photo, and that sort of thing.

I feel like that’s the sort of attention to colour coordination that you might not get with an all-male team!

The strange thing was that while we’d all been drawing pictures with the flat pen, when we switched it to the new glowing pen, we all started writing messages instead of drawing pictures.

Something about it makes you want to create something that’s connected to the image in the background, rather than doodle a random picture.

Exactly. I think it’s combined with the kind of images you can only get with Wii U Chat to create a tool for communicating feelings.

Are there any other tools, besides drawing?

Actually, we had all sorts of ideas from people inside and outside the company, but in the end we decided not to add any of them. We tried out all sorts of different ideas, but it would have actually taken away the simplicity.

Was it becoming sort of like, “What is this software trying to do here?”

Definitely. (laughs) So we decided to go back to our original concept and make things simple; we really just concentrated on being able to chat with someone and see them while you chatted. So what we have now is what we were left with after we did that.

So the capabilities are simple, but this is the result of having tried all sorts of things and being selective about what you choose.

There were a lot of capabilities that had a lot of impact, and that I thought were really good, but I tried to think about what was really necessary when it came to using this long-term as a part of daily life.

There certainly are a lot of features that people use once, but then never use again. And if that might make things more complicated and make people shy away from it, it’s better to just decide not to add anything unnecessary.

That’s right. We do want as many people as possible to use this, after all.

What about you, Watanabe-san? Do you feel that Takeda-san’s idea became a reality?

Yes. I think it was realised in a pretty nice way, too. I think back when we were working with Nintendo 64 and Takeda-san was first saying how he wanted to have a TV phone as the theme, creating a communication environment was a bit too much of a long shot in terms of the hardware we had back then. But these days, it’s normal for even our grandparents have the Internet and even if you have only just got a Wii U, you could be chatting with it that very day. I think that’s the best part of it. 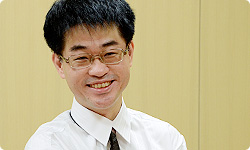 I think the important part of that is, as was included in Takeda-san’s initial wishes, that you don’t have to download it from the Nintendo eShop – it comes already installed on the console to begin with.

That’s true. At an “Ask Takeda-san How He Feels” meeting, he said that the function needed to be on the console because in order for it to work, each person needs to have it.

The way it works is that the day you buy it, as soon as you connect to the Internet, it automatically downloads the Wii U Chat from the network.

I think one of the reasons that TV phones up until now didn’t become widespread is because people thought you might have to clean your room and make it look more presentable. But because the camera is in your hands, you can turn it in any direction you want, it’s made so that you don’t have to show anything you don’t want to. And on top of that, being able to project the recipient onto a large TV screen created an interesting balance. 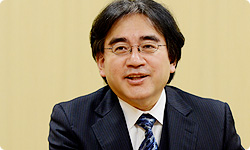 That’s true. Because the camera is handheld, it will show the person holding it in extreme close up and it’s interesting because, for example, other family members might peer over and appear on the screen from time to time.

That’s very true. I hope it comes in handy not only for families, but for people who can’t get out much, like mothers who are busy with young babies. There are so many ways to use it by connecting two living rooms via Wii U Chat.

There really are so many situations you can use it in. I hope it will become apparent that it was worth our hard efforts having built this in as one of the standard features. Thank you so much for coming today.