How did you decide on musical genres and songs?

At first there weren't many songs, only 10.

And they were all classical.

Why all classical? Is that what Miyamoto-san wanted?

No, we had our own reasons. (laughs)

Did you? (laughs) But the songs in Wii Music are special. The amount of data for each song must be incredible.

I thought so. The software has to be ready to respond so that no matter how someone plays, the song still sounds all right. The music scores alone have to be fairly substantial, and you can’t leave it all up to a computer, right? 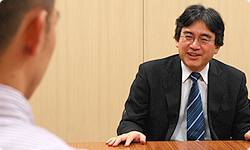 When I saw the final product, I thought the song programmers must have had one heck of a time. (laughs)

That’s one reason there were only 10 songs at first. (laughs)

Why were they all classical?

There were only 10 songs, but you could play around with different arrangements. We thought 10 songs would be plenty to serve as material for that.

I see. How did the game change into its present form?

Well, we consulted Miyamoto-san, and he said there weren’t enough songs. He suggested 100.

We asked him to let us think about it. (laughs)

I’m sure you wanted to take it back and think about it! (laughs)

So we mulled it over.

I knew it would be incredibly hard. But after I’d thought about it, I decided 100 songs were necessary so we should do it.But I thought that with so many songs, a lot of them would sound the same. And besides, like Wada-san just said, one song could be played a number of different ways. I thought that even with 50 songs there were so many ways to expand upon them that no one would think it was too little.When I told that to Miyamoto-san, he said that 50 would be fine, and the matter was settled. He did add, however, that less than 50 was out of the question. (laughs) 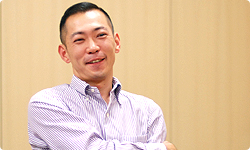 Fifty was the absolute minimum. (laughs)

Wada-san, what did you think about that number?

Attitude is everything. (laughs)

The timing wasn’t bad, though. When we settled on 50 songs, the sound team rallied behind us.

You mean you borrowed a lot of members from the sound team?

Right. I put in a plea to Koji Kondo. I put it rather strongly, saying, in effect, ‘Come on! It’s a sound game, for Pete’s sake!’ (laughs) So we ended up with an amazing team.

Yeah, it really was amazing.

I heard about that. Our battle-hardened, powerhouse sound team pulled behind you.

I’ll read you some of the names. First of all, Koji Kondo, whom I’ve mentioned a couple times, came on board to lend general support.

There may be no need to explain, but I’ll add that he’s Nintendo’s foremost music composer. He’s worked on series such as Mario, Zelda and Star Fox.As you read each name, could you mention what they’ve worked on?

Wow! I hate to rave about our own staff, but what an awesome line-up!

Uh-huh. We really had some first-rate individuals helping out. But without so much experience behind us, we may not have been able to make this game. Like you said earlier, the songs themselves were only half of it.

Right, you had to do a lot more than simply input music scores.

Right. There are limitations built in to each function, and we had to allow players to play the music with a twist in such a way that it would turn out all right whatever they did.

Could you briefly explain how you did that? 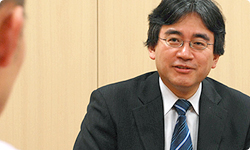 In order to allow players to twist the music and make it their own, first we had to put into place a default arrangement to serve as an underlying framework. If we overdid this, the player’s hands would be tied, and he wouldn’t be able to play freely. So I told the team to provide the best mix of ingredients.

In other words, don’t cook it because that’s the player’s job.

Exactly. I asked them to assemble the best ingredients in such a way that no matter how you cooked them, the final dish would be all right. It would have been difficult to make a different team understand that. They let me make unreasonable demands like that.

Under normal circumstances, any one of those guys could handle the sound for a whole game all by himself! (laughs)

So…50 songs - with a full variety of genres.

Did Miyamoto-san give you any suggestions regarding the genres?

Yes. (laughs) He said we had to include blues.

Hah! And did you?

We added it at the end.

Of course. (laughs) Did Miyamoto-san say anything else that shook things up?

That’s what we developers call a special technique on a musical instrument. Wii Music is designed so that anyone can easily play any of the instruments by swinging the Wii Remote, but in addition to this basic operation of the game, by pushing buttons or moving the analogue sticks you can elicit special sounds for each particular instrument. On the piano, for example, if you slide your fingers across the keyboard, you get a

How did you decide on musical genres and songs?
glissando . On the guitar, there’s a technique called choking whereby you dampen the strings.
Iwata:

Oh, I see. I’m glad the game allows such techniques.

We didn’t have those until E3.

The one not too long ago. 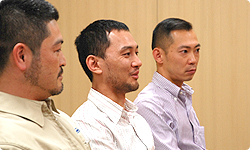 No, the one not too long ago.

You mean the one that just finished?!

Yeah, we didn’t have glissandos or choking until then.

Until then we were focused on creating a game that anyone could play well simply by swinging the remote.

Methods of play are divided into four broad categories:

How did you decide on musical genres and songs?
piano , guitar , trumpet and violin . We were trimming away extra operations that would cause the game to depart from these core methods. I thought, ‘OK, so maybe there are these techniques like glissandos and choking that you want to do when you play an instrument, but we’ve got to draw the line somewhere.’ Still, we were adding extra techniques up to the very end.
Iwata:

How did Miyamoto-san tell you that was what he wanted?

One day Totaka-san received a summons.

A summons? (laughs) You mean Miyamoto-san wanted to talk to him about something?

OK, he got an invitation. (everyone laughs) 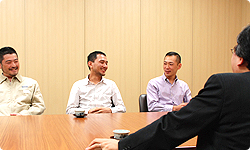 When you get an invitation, you come back with more work. (laughs)

That seems to happen a lot. (laughs) Since Miyamoto-san plays guitar, I suppose he wouldn’t let you get by without adding choking.

But like Wada-san mentioned earlier, we had chiselled away such frills so players wouldn’t be confused. We’d chiselled them away, but-

You had to think about it one more time.

Exactly. One attractive aspect of the game was bringing out the particular characteristics of each instrument, but easy operability common to all the instruments was also important. Miyamoto-san was afraid we were going to lose what was most attractive.

We continued to polish up game operation and most of the programming had been taken care of, but even though the game was easy to play, something had been lost of each instrument’s particular characteristics.

We kept worrying that operability would become too cumbersome, and that we’d have to add instructions within the game about all the special techniques. But Miyamoto-san said that even if we didn’t explain everything, players would have a good time discovering differences in sound that arose when they tried something new, like hitting a button. That can happen when you play a real musical instrument, too.

I see. So those functions were a sudden addition after E3. I do think it improves the game’s appeal.

Excuse me, may I say something? You guys have completely missed the point of all my wisdom! 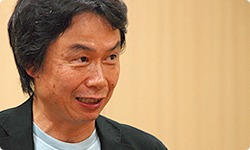 Ah! Miyamoto-san, you’re not supposed to be here.

Well, it’s a good thing I am. It’s nice that the game gained appeal, but without those extra features, the instruments wouldn’t sound like themselves! For example, if you compare single notes from the guitar and ukulele sound sources, you can hardly tell the difference between them. If you ask the sampling staff, they’ll tell you the source sounds are different, but your average person out there can’t tell just by listening to single notes.A ukulele’s a ukulele because it’s four strings on a small body and neck that you strum all at once with your fingers, and a folk guitar’s a folk guitar because you can strum away at it. That’s what makes them feel real. I’m certain that’s what I told you, but you don’t seem to remember at all!

Miyamoto-san’s not supposed to be here.

Can anybody else hear Miyamoto-san? I could swear I just heard him talking.

I can hear him, too!

It’s just like he’s in the room with us!