1. Born from a Hobby

Today we’ll be talking about how Wii Fit was created. First, I’d like to interview Miyamoto-san, the man who first came up with the concept behind this project. Normally, I have you appear at the end of my interviews, but because I can’t very well proceed without asking you why you decided to make such an unusual product unlike any before it, you’ll be up first this time round. So, let’s begin.

Miyamoto-san, you’re known for repeatedly creating games based on your hobbies, such as Pikmin1 for example, which was based on your hobby of pottering around the garden, and Nintendogs2, which was based on when you first kept a pet dog. With Wii Fit, you’ve managed to incorporate your interest in keeping track of your weight into a product. 1 An AI action game for the Nintendo GameCube that revolves around searching for parts of a destroyed spaceship alongside mysterious life forms known as Pikmin. It was released October 2001 in Japan and June 2002 in Europe.

2 A communication game for the Nintendo DS about enjoying spending time with your favourite puppies. It was released in February 2008 in South Africa.

So I have! (laughs)I’ve been told in the past that it’s better not to mix my hobbies with my work, or that it’s best not to try and make something I know intimately into a product, and I actually agreed with those notions at the time. However the simple fact remains that concepts like Nintendogs and Wii Fit work very well as games, and I’m glad that I was able to be involved in their development while maintaining a customer’s point of view.

Well then, to get us started I’d like to ask you about your hobbies. What was it that got you interested in keeping track of your weight?

You know, this is likely to lead in to quite a long story. Is that alright?

Be my guest! (laughs)

Up until now, there have been numerous times when I’ve become aware of my body. For example, when I graduated from university and joined the company, I ended up putting on weight. We were so busy back then, and I’d say things like “The only thing I look forward to is having a bite to eat”...

So you were working long hours, and having late night snacks? (laughs)

Precisely! (laughs) It continued along those lines, and then I got married and put on even more weight... So, eventually it dawned on me that this was no good, and once I turned 40, I decided to take up swimming.

Yes, I remember you used to say quite often that your back ached before you took up swimming. But once you’d started, it got better.

It did. One of the main reasons I started swimming was because my doctor told me that the pain in my back was due to being out of shape. But when I started regularly going to the swimming hall, my weight dropped quite a bit, and it felt like my overall fitness had improved as well. I started thinking that getting fit could actually be fun. 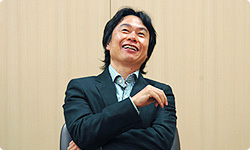 So that was how you first got into it?

Well, it does feel good to be active, doesn’t it? I also think there are some psychological benefits from becoming absorbed in doing something. I used to play pachinko3 many years ago, but that stopped when I started swimming. Simply swimming without thinking about anything except how demanding it was had a similar effect to the stress relief I got from pachinko, which enabled me to escape the cycle of worries I had.Another thing I managed after quitting pachinko was to stop smoking, which also led to better fitness. To be completely honest though, I don’t really like being thought of as such a serious person. I mean, I didn’t drink in the first place, and on top of that, I managed to quit smoking and get actively involved in doing sports, so I must seem like some kind of goody-two-shoes school prefect! (laughs) Even though I thought this lifestyle didn’t exactly suit my personality, I felt good about my body. 3 Pachinko is a popular Japanese game which is a mixture between a slot machine and vertical pinball. The player controls the speed at which many small steel balls are thrown into the pachinko machine in order to send them into special holes, and the aim is to get as many balls into the holes as possible. The balls won by the player can be exchanged for prizes.

Even though you weren’t aiming for absolute perfection, right?

Right. So, once I got better at swimming, I became able to swim effortlessly.

So you felt like you could swim long distances easily?

Yes, that’s right. So as a result, the actual amount of exercise I did decreased, and I started to put on weight again! (laughs)At that point, I became interested in the changes in my weight, and after a bit of research, I learned about a special weight monitoring diet4. I thought this was quite interesting, and though I didn’t record the results, I started measuring my weight on the old analogue bathroom scales we had in the house. While I was doing that, my wife suggested buying better scales, so the next time she went shopping with the kids, she bought me new bathroom scales that could measure in 100 gram units, and featured a body fat measuring function. That was how I got started recording my weight on a graph. 4 A dieting method where you measure your weight at a certain time every day and monitor the changes in your weight.

I think most people normally wouldn’t even think of tracking their weight on a graph.

Personally, I quite enjoy doing things that become habitual, as if it was daily routine work. I put the scales and graph paper in the bathroom, and after continuing the pattern for a month, it became like a ritual before getting into the bath. I wasn’t able to relax without doing it! (laughs)Anyway, I was able to continue with it. In fact, once the graphs I’d recorded started to pile up, I started to feel a strange fondness for them – regardless of whether I was gaining weight or losing weight.

I’m not quite sure, but I think I started about 4 years ago. I’d already been keeping graphs for about a year when the Wii Fit project first started.

At first, before it became known as Wii Fit, the title “Health Pack” was used.5 When you first came up with that prototype, how did you think you would develop it into a product? 5 Health Pack was a working title for Wii Fit used until the E3 (Electronic Entertainment Expo, an annual video game conference held in the United States) event in July 2007.

The prototype didn’t actually consist of anything at all. This caused the staff a lot of bother, as we only had the core weight-measuring element. Once we’d settled on the Wii concept, one of the things we decided on was that it should be something families could gather around. We thought about what game would be good to have a copy of in every home, and out of the selection, we had Wii Sports6, Wii Play7 and also “Health Pack”... 6 A sports game bundled in with the Wii console in Europe and South Africa that includes 5 sports: tennis, baseball, bowling, golf and boxing. 7 A game that introduces users to the Wii Remote, released alongside Wii and bundled with a Wii Remote.

So with the core element of measuring one’s weight, did you have any specific idea of how things would develop?

Well, when I was measuring my weight, I’d do it naked in the bathroom, so I couldn’t very well do it in front of people. But I’m sure it would be fun for people to measure their weight in the living room with the whole family, take data every day and check the graphs, then maybe poke fun at Dad who’s put on a little weight, or congratulate Mum on her diet, etc.

Incidentally, (Takashi) Tezuka-san8 still takes pictures of his meals with his phone whenever he has something to eat. How long has he been doing that for? 8 General Manager of the Software Development Department at EAD (Entertainment Analysis & Development Division). Works on series such as Mario, Yoshi and Animal Crossing alongside Shigeru Miyamoto.

I think it must be since around the same time I started recording my weight.

What a pair! (laughs)One who measures his weight and records it daily on graphs, and the other who takes photos of all his meals!

That started from the same sort of idea – that it would be useful if you could just input the photos you took of the things you eat.

So, even elements like that became ideas for the project.

They did indeed. We even thought about making it so that you could take your DS out with you and store data on what you ate. With health as part of the Wii catalogue, we also saw the subject of food ahead of us. We asked the director to create a system where you could easily enter the things you ate into the DS, and also had the planner begin an experiment where he’d measure his weight. However, I’d already reached the crux of the development of titles like Wii Sports at that stage, so I ended up neglecting the project, asking others to take care of it. Sometimes they asked me “What are you going to do about it?” (laughs)

The staff members who were suddenly told to measure their weight and record the things they ate must have been quite perplexed, mustn’t they? 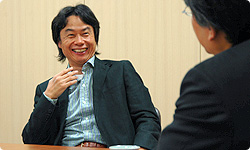 Yes, I think they were. They must have had absolutely no idea what they should do. Please ask the staff appearing in the next interview about that one. I just told them to make a pleasant interface or gave them some hints to make it useful.

It’s like a dialogue between a Zen monk and his follower, isn’t it? Though, game design always tends to be like that at first.

For example, I told them that we certainly couldn’t make it so that when you enter the amount of rice you’ve eaten, a message comes up saying “I ate X grams”. It’d be much clearer to touch the rice icon and then have three bowl icons appear, by which I was trying to emphasise the importance of streamlining the input system. I also told them that we ought to think about what kinds of things can be done every day when a device which measures your weight can be connected with the Wii console. It must’ve been quite a challenge for the team to grasp the feel with only vague instructions like that, so I’m sure they must have been really struggling with it. Furthermore, there were only three people handling the project: the planner, producer and director. Not to mention that we hadn’t decided in which direction to take the software yet, so we couldn’t increase the number of staff assigned to the project either.