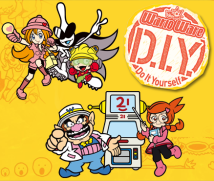 1. It Started Over Five Years Ago

(Editor’s note: Original interview was posted in the Japanese Nintendo website on April 2009)

What kicked off development of WarioWare D.I.Y.? Abe-san, would you start us off?

Sure. To tell you the truth, I’d been thinking about (the Japanese original name of) the title, ”WarioWare D.I.Y.” for quite some time. So I looked for the old files, and I found text dated September 2003.

Yeah. After we made WarioWare, Inc.1... 1WarioWare, Inc.: Minigame Mania: The first game in the series. Released in Europe in May 2003 for the Game Boy Advance.

I asked you to make a GameCube version of WarioWare, Inc. at top speed.

We made WarioWare, Inc.2 in six months. The (original Japanese name of the) name WarioWare D.I.Y. is found in text written about the time development of that game finished. 2WarioWare, Inc.: The second game in the series. Released in Europe in September 2004 for the GameCube.

So why is it called WarioWare D.I.Y.?

When we were working on WarioWare, Inc., making the microgames was lots of fun. Even though it was work. 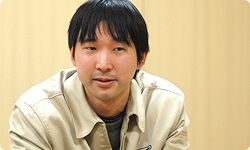 Even though it was work? (laughs)

I mean it was so much fun that it was hard to imagine it was work at all. (laughs) Normally in game development, the staff is divided into areas of expertise.

Generally, a designer draws the images, people exclusively in charge of sound work on the music and sound effects, and programmers write the program.

But for WarioWare, Inc., one person drew the images and wrote the program for each microgame. On fast days, I was making one game a day.

If you hadn’t worked at that pace, you wouldn’t have been able to complete so many microgames in time for the release.

I was trying to show the microgames I had made to the other staff members. Beforehand, I would get all excited. Seeing everyone’s reaction was really fun.

I see. So you thought you would like gamers to experience that enjoyment? 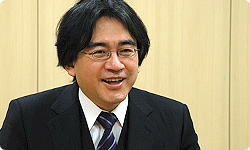 Exactly. A while ago, some software was out for making RPGs and shooting games. I remember it was fun when I tried it. But I don’t think I ever completed anything.

It takes quite a long time to complete one game, and somewhere along the way I would quit. I used to write my own manga. I would always give up part of the way through a long story, but I could do a short comic strip.

You get tired of things easily.

I can see the connection to WarioWare. It looks like people with a short attention span made it. (laughs)

Nonetheless, the series has continued for quite some time. (laughs)

But I never get tired of WarioWare. Development of D.I.Y. kicked off when I thought that since microgames only last a few seconds, gamers could experience the fun of easily creating microgames themselves, like drawing comic strips.

What was written in the text from five and a half years ago?

At the time, I was still writing it as “Iris.”

You didn’t even hesitate to say that! (laughs)

The “Iris” Abe-san mentioned isn’t widely known, so I will explain. Iris was the codename of a next-generation device we were exploring to succeed the Game Boy Advance—in other words, before development of the Nintendo DS. Eventually, it became a two-screen device with the codename Nitro, which went out into the world as the Nintendo DS. So, broadly speaking, Iris was the foundation for the Nintendo DS. You might say that Abe-san carried out his original objectives across five and a half years.

That’s right. What I wrote down then was a plan for the Iris. It said, “Software for making microgames yourself using the WarioWare system. At first it just looks like a way to make games via small changes, but in the end…” 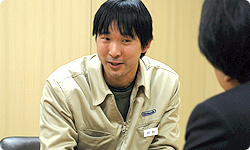 That’s important. (laughs) It said, “A game creation tool allowing eventual creation of rather substantial content. But only within the restrictions of microgames and only about five seconds long, so it’s all very practicable.”

Does the current product differ from what you wrote back then?

You never wavered even once?

No. We never strayed from that.

Why did it take five and a half years?

At first I thought we could make it for the Iris, but I felt like it was somehow missing something, and time flew by. While that was going on, plans for the Nintendo DS arose. You can easily draw pictures with the stylus, so it was perfect. But creating microgames yourself isn’t really that easy, and I had other games to make myself, so it got put on hold. Then, when we were making WarioWare: Smooth Moves3, we were discussing the functions of the Wii console and I heard that with WiiConnect24, you could exchange data. 3WarioWare: Smooth Moves: The fifth game in the series. Released for Wii in Europe in January 2007.

In other words, you might be able to create something allowing players to enjoy adding games, like a daily microgame.

When various departments were gathering to discuss the functions of the Wii console, you represented the Software Planning and Development Department. Your experience at that time had an influence on the structure of WarioWare D.I.Y.

Then when work on Smooth Moves finished, you started development of D.I.Y.