4. The Story at the Core

The Last Story does have a single central story that will guide the player as they work towards reaching the goal. But at the same time, you have provided opportunities to play the game differently at each and every turn. I think you can justifiably claim that everyone can play the game in their own style. Sakaguchi-san, did you feel that you needed to take this approach in order to get players on board with what you were trying to achieve?

Yes, I would say so. I wanted to present the player with complex choices, as if they’d been thrown into a toy box full of different things to play with, which they could then pick and choose from. But at the same time, you need to ensure you’ve got a solid story at the core of the game.

So you’re saying that you couldn’t consider getting rid of that central component of a classic RPG, the story. Up until now, RPGs have strived to come up all sorts of ways of increasing the content you can access after completing the game, in order to ensure that players want to keep playing it. But with this title, you’ve tried to do something else. I get the impression that your goal was to give the player limitless freedom within the game, while at the same time also making it so they want to play again. You aim to achieve this by getting the player to think about other ways they could have approached the game.

Yes, I’d say that’s true. I mean, there are games where there is no grand, overarching story, and the player can simply explore a town as they please. But I don’t think that approach is entirely correct. You still need that central element of a classic RPG – the story.

Well, of course there are many different kinds of players. There are those proactive players that set their own goals and get involved in the game that way, and then there are more passive players, who prefer to be set specific goals. Do you feel that the story functions as a method of giving the game the breadth required to include all of these different types of players?

Yes, I do. And I also think that you need a large-scale story at the start in order to impress upon players the particular rules that are specific to the game world, and to allow them to become accustomed to the controls. I think that the finer details of the game system, and the online mode, are elements that you can enjoy after you’ve really immersed yourself in the game world. To draw some kind of parallel, I’d say it’s like when you keep chewing gum and then you get a little hint of a second flavour coming through. That’s what I was aiming for. 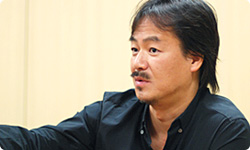 Matsumoto-san, would you say that you were on the same wavelength with Sakaguchi-san from the start?

Yes, I was. I began with the realisation that even someone like Sakaguchi-san was willing to reassess the way he had done things up to that point. That inspired me to look at what I had created up until then, and to really think about what kind of game we wanted to present people with. We started from scratch in that regard,

When a game creator obeys a certain ‘grammar’ in their games, players will come to expect certain things. But then there are those people who have played games for years, and those people who are coming to the game for the first time. It’s incredibly difficult to come up with something that will satisfy both sets of players.

But I think that the RPG is the game genre that satisfies both of those kinds of player. RPGs should be constructed in a way that appeals to a wide variety of players, and the fact that you can devote a great deal of time to building up experience and progressing in the game gives them a uniquely welcoming aspect. After making Blue Dragon, one regret I had was not making the game kinder to players. I think this is connected with the kind of broad appeal that you spoke about just now.

Well, there are a lot of players nowadays who won’t play an RPG right through to the end.

Yes, you’re right. The sheer volume of different media available to players has increased enormously. I think this is why developers think that they can keep players happy by including a lot of different elements. But imagine eating delicious French cuisine day in and day out. You would get tired of it. In the same way, if you simply go on increasing the amount of game elements, players will eventually grow tired of it. The question is then how to get players to continue right through until the end. It’s important to think about how to prevent the player becoming fed up of the meal halfway through. 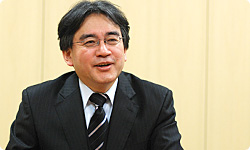 Actually, I don’t think that The Last Story is like French cuisine. It is food with a brand new flavour. The game system and story that Sakaguchi-san has created are like the new flavours that draw the player in, and get them to sample the other dishes. What we really want is for the player to stay with us right until the coffee at the end of the meal.

Perhaps what you were aiming for was a game where players felt comfortable with the way things were unfolding, while at the same time being able to enjoy a new flavour each time they played.

That’s right. It was really tough coming up with those new flavours.

What were the particular problems you faced in that regard?

Specifically, it was the behaviour of the enemies. We made it so players needed to come up with a fresh approach in order to break the deadlock during certain battles.

I felt that it was important to set the player new challenges as they faced the powerful enemies in the latter parts of the game, and set them the task of defeating those enemies using the skills and tactics they’d mastered. That kind of excitement was something I felt needed to be included.

I think that the best motivation for getting players to overcome a difficult section of the game is to make them think: ‘Wow! I’m amazing!’ Take the moment you solve a puzzle in The Legend of Zelda, for example. I think it’s that feeling that encourages a player to keep trying.

There’s also that feeling that maybe you’re getting too powerful, and that the developer never foresaw something like that. It’s important to include a few elements to make the player feel like that! (laughs)

That is a really great feeling.