3. Everyone Can Play in Their Own Way

Listening to you both, it sounds as if your goal with The Last Story was to make a new type of game where everyone could play in their own way. Then when players discuss the game, they’ll think: ‘Hmm. I remember it a little differently from you.’ They’ll be able to enjoy asking each other how they played it. I really do think that’s very interesting.

Yes, I think you’re right. It’s really fun to see videos of people playing, and thinking: ‘Ah, so you can play it that way too...’

That was the idea behind our decision to make the camera system in the game one in which the view wasn’t fixed during the event scenes. Rather, the player has a degree of freedom in what they view. This allows every player to select their own camera angle. This means that when you view other player’s footage on video-sharing sites, you’ll think: ‘This is the same scene, so how come the camera’s moving differently?’

Ah, it’s really interesting to hear you say that. I do think that video-sharing sites have really changed games. With footage where the purpose is to reveal what happens in the story, it robs players of the motivation to play the game themselves, which is obviously a huge problem. But even with footage that was intended to show the game’s appeal, simply watching those videos can give people the feeling that they’ve played the games themselves. I think this is particularly the case when you’re watching stunning footage of the main story in the game. In this context, I would say that your idea is extremely interesting, and very significant.

I think you’re right. With The Last Story, every player will be able to create videos of their own, and people watching that footage will wonder how they would have approached that particular section. I think this will actually give them fresh motivation to play.

So even though it’s the same game, there are different ways to play it.

That’s right. When I was testing the game, I would really enjoy playing around with the camera angle. (laughs) For instance, I’d deliberately make the camera shake to give the action a realistic feel! (laughs) 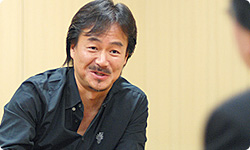 As for me, I’d keep the camera focussed on the heroine, Calista, during all the event scenes. (laughs)

So every player can control the camera in their own way. The scene might be identical, but you can get a completely different impression of it by changing the camera angle.

That’s right. Simply by not focussing on the character that’s speaking, you can get a different meaning from the scene.

In addition to that, the items found in treasure chests or that get dropped by enemies are all random. As you don’t know what you’re going to get, it makes replaying the game enjoyable.

You can also change what the characters are wearing.

With the freedom to change the camera angle, and enjoy modifying the characters’ wardrobe, it means that every player can create their own unique images. As the game design for The Last Story is really innovative, just watching footage of someone playing it through is not going to be the end of it.

There are all sorts of other elements in the game that let the player play the game in their own way. For instance, when you play online and select your character, you can then choose snippets of that character’s voice from your main game, and get them to speak while you’re playing online.

There are a lot of different voices that feature in the main story. It’s not just normal conversation or event scenes. You’ll hear your companions talking in all kinds of situations, such as when you’re walking about, or during battles. For instance, the leader of the party might give advice before a battle begins, and then give all sorts of orders during the battle itself. There’ll be exchanges that you don’t quite catch, or that you don’t really listen to, and there will also be really important conversations that serve to raise the dramatic tension.

The amount of dialogue in the game is certainly one of its most notable features.

That’s right. And because there are so many good lines, we made it so that you could also use them online.

I think it makes a good substitute for voice chat. For instance, you might get Yurick repeatedly calling for his father, and things like that. (laughs)

I hope players will enjoy fighting together, with everyone having something to say. (laughs)

Taking a line completely out of its original context might well give it its own curious appeal. 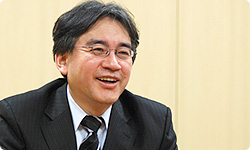 The story of how the voice parts in the game developed is interesting. At the start, members of the dev team would just record their own voices to use during the game’s development, and they got better and better at doing these voices. In the location known as the Arena, there are two commentators, and we felt that a member of the dev team might be able to do funnier lines than a professional actor. There was a certain merit in that slight amateurishness – we thought it had a certain charm and character that wouldn’t necessarily have been there if we’d used a professional.

That’s because the game designer was actually delivering lines that they’d written themselves.

That’s why I proposed that we retain a member of the dev team’s voice in the final game. But as you can imagine, that idea got rejected. (laughs)

The team member whose voice was used in that section of the game begged us not to keep it. (laughs) But when we came to actually recording the lines, we began by getting the actor to listen to the voice we already had in the game. 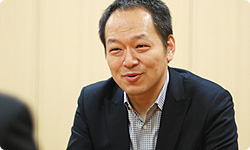 So you were issuing a sort of challenge to the pro?

Well, we wanted them to get a feel for what this member of the dev team had put into their voice work.

We hadn’t wanted to go overboard in terms of the amount of expressiveness in the voice, and the slight amateurishness of our staff member’s voice was a surprisingly good fit. It wasn’t an easy thing to say to a professional, but we actually requested that he adapt his delivery to fit the style established by the original voice. By being so particular about this, we did manage to get a really good live feel to that voice in the end.

Just to return to another subject for a moment, could you tell me more about the online mode?

In the online mode, you can choose between taking part in a ‘Deathmatch’ or joining other players in a ‘Co-op’ game. Up to six players can take part in both of these modes.

The ‘Deathmatch’ is a competitive mode, letting you enjoy something with a different feel from the main game. It’s a chance for players to show off their outfits to each other.

When you play cooperatively online, does it feel different from playing alone?

Yes, there’s that simple pleasure you feel when someone helps you out. There’s also what known as a ‘chain’, which is a sequence of attacks that you perform in combination with other members of your party, and which can inflict a great deal of damage on your enemies. When you do this together with other players online, it really serves to strengthen the bond you feel between you.

Another aspect of the online mode is that you can play as other characters besides the hero, Zael. So if you choose to play as a wizard, for instance, you can cast spells during battle. And of course, if an enemy attacks as you’re casting the spell, you’re in trouble. This allows you to sympathise with the wizard you are trying to protect in the main game. You’ll think: ‘Hey, why didn’t you look after me?’ (laughs)

Well, in that case, you need to select a voice saying: ‘Help me!’ (laughs) That’s bound to get your allies running to rescue you. My image of The Last Story is that it’s a very open game, which is fun to explore together with your companions. I think this feeling of togetherness is enhanced when you play with other people online.