Because we don’t often have the opportunity to sit down and talk about Smash Bros., I’d like to use the last part of this interview to turn back the clock and talk about the start of this series, beginning in 1999 with the Nintendo 64 title Super Smash Bros. You and I were responsible for developing this prototype.

At that point in time, we weren’t utilising any Nintendo characters, and while you handled the planning, specs, design, modeling and movement, I worked on programming all by myself. In some respects, it was the ultimate handcrafted project.

The team setup was like one that would be making a game for the NES! (laughs) We had one additional person that helped us with sound though.

It was at a time that we were trying to find ways of making a game that we really wanted to do and bring to fruition, while we were working on other titles. You came to me with an interesting idea and, as I thought you should immediately start work on the project and try and bring it to life, I tried to offer some encouragement by agreeing to do the programming and told you to write up a project plan. As we both had other responsibilities at the time, it was hard to find time to work on it though. 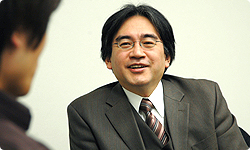 If I remember correctly, at the time you were heading another project that took up most of your time.

I didn’t have any time during the week and had to program on the weekends. I would assemble the data and specs you sent me, and the project slowly took shape as we sent changes back and forth. It was interesting to work on the project though as it grew more entertaining the more I incorporated your ideas.

A staff member even complained that you seemed to come to life whenever you were working on the programming for our project. (laughs)

They were probably right. I felt something special about this title from the very first moment I started programming for it. Even so, we had no idea it would grow to such epic proportions.

Right. I mean, we didn’t know at the time that we would be able to use Nintendo characters.

In retrospect, the main reason I undertook the project was to build a 4-player game that utilised the Nintendo 64 system’s unique 3D Control Stick. What were your reasons?

Well, I wanted to offer an alternative to the two-dimensional fighting games that were crowding out the market. I also wanted to see if it was possible to make an interesting 4-player game that offered a new experience every time you play. Simply put, I was aiming to design a 4-player battle royal.

I seem to remember “4-player Battle Royal” being written on the cover of the project planning document.

Right. I hadn’t given it a title yet.

We hadn’t even come up with the codename Ryuoh yet. I think we ended up using Ryuoh because we happened to use scenery from the Ryuoh-cho neighbourhood, the location of HAL Laboratory in Yamanashi Prefecture, as the background for the game.

I was the one who took the pictures of the neighbourhood. I had been working by myself on graphics and movement, and just when I was thinking of what I could use for a background, “click,” the camera decided for me. (laughs)

I’m deeply moved that a series with such austere beginnings grew to be the size it is today.

Even though all we had in our first prototype was four faceless characters on the screen, the game took off in a completely different direction with the addition of Nintendo characters. Can you remember how this change came about?

Of course. I asked to use Nintendo characters since it was so hard to accurately convey to the players the atmosphere of the gaming world where they play a fighting game on home console. You have to have some main characters in a fighting game, and when you line up character 1, character 2, character 3 and so on, the main characters end up blurring together. With a game for the arcade, it’s okay for character development to take a backseat since players are content with the fighting. With a fighting game for the home console, however, you have to set up the general image or the atmosphere of the gaming world right from the start or else the game suffers. That’s why I asked to use Nintendo characters. 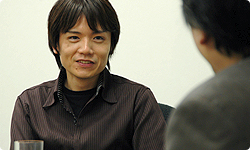 Nowadays, we take it for granted, but at the time, people had reservations about mobilising an all-star cast of characters.

We were put through the wringer alright. (laughs)

I guess fans were upset by the prospect of pitting characters like Mario, Link and Pikachu against one another. We had a hard time convincing them of what the fun and depth that were so obviously present in the Smash Bros. trademark fighting style would offer.

We even wrote an “Ultimate Manual” to try and persuade interest. Since we put this guide online, you might argue that it was our original Smash Bros. Dojo website.

That’s right. And Smash Bros. Dojo has been updated for each addition to the series. It continues to act as the official website for the series and still adheres to the original framework; meaning the developer himself adds all the updates.

And now it's available in seven languages. I’m grateful for the photographers, web developers and translators who make it all possible.