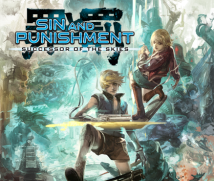 Thank you for taking time out of your busy schedules today.

It’s a pleasure. Thank you for having us.

The previous incarnation of Sin and Punishment1, for the Nintendo 64, is a bit of a cult classic. I’ve asked you to come all the way here to Kyoto because I’d like to ask your help in conveying to as many people as possible what kind of people make Sin and Punishment and what is so great about it. I’m counting on you. 1Sin and Punishment: a shooting game developed for the Nintendo 64 and released only in Japan in November 2000. Since September 2007 the game is also available in Europe on the Virtual Console for 1200 Wii Points)

First, I’d like our guests from Treasure2 to introduce themselves. 2Treasure Co., Ltd.: A video game developer founded in 1992 with particular expertise in action and shooting games. Among the many games it has been involved in developing are Mischief Makers, Ikaruga and Wario World.

I’m Maegawa, president of Treasure. I served as producer on Sin and Punishment: Successor of the Skies.

I’m Nakagawa from Treasure. I was director this time, so in addition to my main job as programmer, I also did planning or whatever else came my way.

I’m Suzuki, a designer. I was an employee of Treasure when the first game came out, but now I’m a freelancer. I lent assistance this time as art director.

You all worked on the previous game, right?

I would like to hear how the first game began and how you made it.

Mario 644 used the right position, so everyone used that. 4Super Mario 64: The first Mario 3D action game, released simultaneously with the Nintendo 64 in Europe in March 1997.

We started talking about how anyone hardly ever used the left position, even though you can perform independent actions with it.

You can do some unique controls, but no one used it.

Right, no one used it. But we thought it would make for an interesting way to play the game and started development.

So Sin and Punishment began with you deciding to make full use of the left position.

Yes. We thought maybe you could aim with the analogue stick and move with the +Control Pad in the left position. 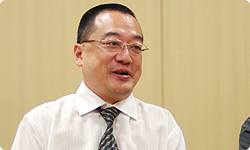 How did that work out as you began development?

We realised that the independent operations in the left position would be unexpectedly hard for players the first time they tried it.

Because they’d never done it before.

And Nintendo told us that. What’s more, a Controller Pak5 could be plugged into the Nintendo 64 controller, and there was talk of adding a sensor to it. But we had already begun development for the left position. Adapting it to a sensor at that point would have only lengthened a development process that was already dragging on. We abandoned it, but after some time had passed, the Wii arrived… 5Controller Pak: An accessory for the Nintendo 64 controller. It could be inserted into the bottom and used to save game data, etc.

That’s quite a long time! (laughs)

It sure is! (laughs) When I saw the Wii Remote, I thought, “So this is the sensor they were talking about!”

So I said, “Come on, let’s make Sin and Punishment for Wii!” and started bugging these two about it.

We thought, “We could use the Wii Remote’s pointer to aim and the Nunchuk to move! That’s it!” And that’s what got us started.

Wait, not so fast! Before we get into the Wii version, I want to hear about the original game! (laughs) 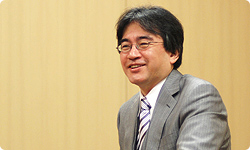 About when did development of the N64 version begin?

It went on sale in 2000, so… The setting for the original game was 2007 viewed as the near future and the story was supposed to occur ten years in the future, so we probably submitted the proposal around 1997.

For a game that was developed back then, Sin and Punishment took a relatively long time. And it went on sale during the last days of the N64. It was like you just barely caught the last train. (laughs)

Not at all. To tell the truth, I ran into some trouble in the days of the N64 myself. Back then, I was president of HAL Laboratory, Inc. The Nintendo 64 came out in 1996, but until 1999 and the release of Smash Bros.6 and Pokémon Snap7, HAL Laboratory wasn’t able to contribute much in the way of new products. That was because the Nintendo 64 drastically changed how things were made up through the Super NES. We ran up against how to make the best use of 3D graphics, and the team had quite a hard time. About that time, in 1997, you wrote the proposal for Sin and Punishment, and the game came out in 2000. Could you tell me a little about the process of trial and error you went through at Treasure during that period? 6Super Smash Bros.: A fighting game released for the Nintendo 64 in Europe in November 1999. 7Pokémon Snap: A camera-adventure game released for the Nintendo 64 in Europe in September 2000.

Okay, um…as Iwata-san just mentioned, how video games are made changed drastically with the Nintendo 64. 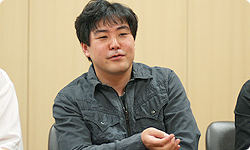 They sure did. It was a huge change.

But before the Nintendo 64, there had been some systems by other companies that were like 3D graphics entry-level consoles. So when it came to 3D know-how…

You already had some.

(laughs) If you didn’t do it well, it wouldn’t work at all.

I was a main programmer at the time, so I really understand what he went through.

Before the Nintendo 64, there were only entry-level consoles in terms of 3D capabilities, right?

But the Nintendo 64 was truly a 3D machine.

That’s because we adopted the architecture from Silicon Graphics, Inc.8 Nintendo 64 had a number of restrictions, but it truly was a full-blown 3D machine. Nonetheless, the limits it had were such that, unless you used it right, it wouldn’t run well. 8Silicon Graphics, Inc.: An American company that was at the forefront of 3D graphics processing technology. Established in 1982.

I’d been enjoying working on the entry-level machines, but when I suddenly got my hands on a machine for real pros, for about a year it just wouldn’t work…

(silently stares into the distance)

(laughs) That sigh was laden with meaning. (laughs)