Miyamoto-san, up to this point we have talked about the new kinds of play added to the DSi, but someone is sure to mention that cameras and music players are all standard in today’s cell phones. What would you say to that?

Well, those kinds of concerns always come up during the planning stages. They did regarding Wii Fit, and even more were raised when we brought out the Nintendo DS.

That’s right. When you try to do something new, objections are sure to appear. Preconceived notions regarding features such as cameras and music players have become entrenched because of existing products, so when you try to explain something new, it can be next to impossible with words alone to draw a distinction with previous products.

Some might say that cell phones are enough. To that, all I can do is respond, “No, take a look at the final product. It’s completely different.” We want to make something you can play with, something fun, and we dedicate ourselves to that end.

I’m not just talking about cameras and music as “features”. We ask ourselves - are we making something that will be fully satisfying to use? Would you really want to use this on the train? Is it easy enough for anyone to use? We really devote ourselves to these questions. For example, when deciding how many icons to place on a menu, we think - will this make it easiest for users? We brood over these things. However, the quickest way to notice the consideration we put into something-toward its convenience, usability and simple layout - is to actually pick it up and use it. 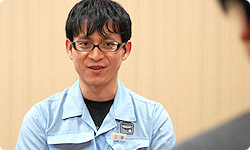 That’s right. Nintendo doesn’t have any intention of directly competing with existing products, but the mass media has a tendency to portray everything as a rivalry between opposing companies. It seems some people have the impression that we want to compete with cell phones or the iPod, that putting cameras or music players in our devices is out of character for us. I hope those who have such an impression will take an interest in what Nintendo can make when it dedicates itself to pleasing as many people as possible who pick up a DS, and I hope they’ll actually pick one up themselves.

Now, here at the end, I’d like everyone to say a little something about how they think the Nintendo DSi is different from other electronic devices out there. Let’s start with Akifusa-san.

Okay. I’d just like to say once more that DSi Sound is more than a music player-it allows you to play with sound. We really broke down the music player, one of the main features of the DSi, so it’s easy to understand and use.

For example, while you’re listening to a song, if you press the Favorites button, you can add it to a prepared playlist. Also, for playlists on your average music player, you have to decide each list’s name on your own, but with DSi Sound, the playlist names have already been decided. The Top 10 playlist, for example, will only hold ten songs.

This may sound like I’m reaching for an extreme example, but since everyone’s DSi has the same playlists in it, I think when many users meet their friends they will say to each other, “Hey, what’s in your Top 10?” 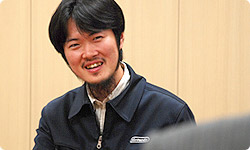 Because of the DSi’s two screens and touchscreen, it’s easier to add songs to playlists than it is on a computer. Development of DSi Sound originally started with an idea from Miyamoto-san, but when I see the final product, I feel like it possesses a value as a music player that previous music players haven’t.

That’s because the DSi has speakers with improved sound quality and volume. Of course, it can’t compare with using fully fledged headphones, but even if you don’t use headphones, you can enjoy listening to music with your family in the living room or dining room. You can enjoy it all over the house, alone in the bathroom or in your bedroom, without having to worry about a headphone cord.

You can do that because the speakers are one with the handheld device. The places where you can use your music player have expanded dramatically.

Miyamoto-san already mentioned this, but I think users will realise how different the DSi is from a conventional digital camera when they actually get their hands on the console. This is just my own selfish desire, but I hope that once the Nintendo DSi comes out, it has an influence on future digital cameras. 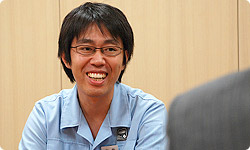 I like that! (laughs) Matsushima-san, you mainly worked on the menu, so it may be hard for you to talk about a difference with conventional electronic devices. Is there any other aspect of the Nintendo DSi that you would like to point out?

Yes. The DSi Camera and DSi Sound are different in that they employ photos and music, respectively, but they’re also similar in that once you do something, you want to show it to others or you want them to listen to it. That widens the sphere of play. Even without complicated instructions, you begin imagining all the possibilities at first glance. In that, I think the Nintendo DSi facilitates a unique style of play. 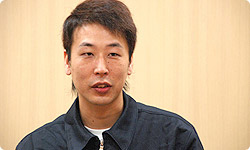 For the original Nintendo DS, PictoChat was included in order to maximise the appeal of the console itself.

It was our first attempt to incorporate this kind of software right into the console, so there was quite a lot of debate.

Right. When I think about it now, we prepared PictoChat as a tool for the DS, but we sort of left how to play with it up to users, which is a little different than proactively providing users with specific opportunities for play. In that respect, we were very proactive about adding lots of concrete play elements to the DSi. That’s why, as a console, it’s quite finely done. 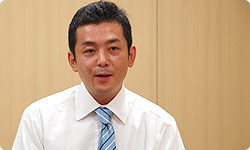 Oh, sorry, I forgot to mention something. PictoChat has evolved for the DSi. You can use colour now. Even if you communicate with someone using the original DS or DS Lite, your messages will arrive in colour.

Thanks for bringing that up. (laughs) And now it’s my turn.

All this time, digital camera makers have competed in resolution and zoom magnification, and that has resulted in cameras that can take prettier pictures than before and photos of objects farther away than before. For cameras, that’s good, but no one has ever done what the DSi has. At 0.3 megapixels, the camera’s specs are considerably low for this day and age, but it easily does a lot that even the most advanced digital cameras don’t. I don’t think a tool with such mass appeal that allows you to manipulate images so easily anytime anywhere has ever been offered anywhere in the world before.

As far as music players go, the emphasis has generally been on smaller size and greater capacity, but when you see the DSi Sound that Miyamoto-san and Akifusa-san have put together, you realise how there were other frontiers to explore. When you think about it, you could say that Nintendo has taken its accomplishments in the world of gaming and applied them in another world. In other words, it is characteristic of Nintendo to shine a light on frontiers that others have missed and present them to its customers in a way that surprises and instils joy. I think with the DSi we have displayed that characteristic of Nintendo to the full. 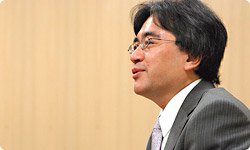 Yes. When people function the way you just described, work is enjoyable. Work in competition with others isn’t very enjoyable. When you’re competing with someone, unless you really beat your rival, you don’t win any praise, but in cases like DSi, when you’re shooting off in a completely new direction, the more you do, the better it evolves. I think it’s a producer’s job to lead his team into that cycle of innovation and appreciation. That’s why, even though everyone may have struggled in making the DSi, they also had fun. 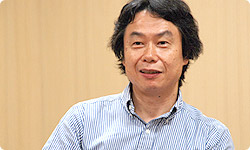