Thanks to some hard work from Mizuki-san and the rest of the Network Business Department, people were able to use that friend list starting the day the Nintendo 3DS system was released. It's really nice that you're able to tell almost instantaneously when the other person connects to the Internet, isn't it?

The people in charge of the servers in the Network Business Department worked really hard, and they've made it so that the instantaneous "So-and-so is now online" message comes through well. Besides that, when someone is playing a game, their Mii character will appear with their Nintendo 3DS system and seem to be playing as well. So you can tell at a glance which of your friends is currently playing a game. I think it feels very true-to-life.

So in future, it will be possible to take, say, Mario Kart, check your friend list, and play against that person right then and there.

Right. Not only that, you won't even have to open your friend list. We've made it so that, when you're in the HOME Menu, you'll get a notification, or the notification light will turn orange, and you'll know that someone's come online. 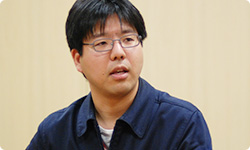 There's a list of Notifications that functions in tandem with the notification light, too, isn't there?

Yes. We use SpotPass6 to deliver messages from Nintendo and notifications that StreetPass has completed successfully. This function was originally implemented on the Wii Message Board7, but this time we've made it so it can be used with handheld game systems as well. On the Wii Message Board, messages which arrived during one day are shown in a single screen, so it was hard to see things from a few days ago. 6 SpotPass: A function in the Nintendo 3DS system that receives various information and content just by being near a wireless LAN access point. 7 Wii Message Board: One of the functions of the Wii console. In addition to facilitating communication functions, such as a household message board, e-mail, and transmission of messages and photos between Wii users, it also distributes information from Nintendo.

Right. But this time, it displays in a list format, so I think it will be convenient to use.

From what I hear, there's talk of using Notifications in games as well.

That's correct. Rather than being a built-in feature, it would be supported by individual games. For example, as well as notifications, items or other data for a particular game will automatically be sent through SpotPass. So, I think it will be fun for people playing games that support the function as they will say, “Oh, I have received this kind of data today!” We’re hopeful that they will enjoy receiving additional data before they know it.

That's it. Whenever it receives data, it will tell you in Notifications. Even if the software isn't in the Nintendo 3DS system, the new information will be communicated, so it may become that little incentive that makes people want to play the game one more time.

So the Nintendo 3DS system is full of data-receiving mechanisms like that.

All right, let's talk about the Nintendo 3DS pre-installed software, starting with Mii Maker. A little while ago, Kawamoto-san said he'd kept an eye on the development, indirectly. What sort of proposals did you make with regard to creating this software?

As with the Nintendo DSi system, inner and outer cameras come standard with this hardware, and I'd always wondered if we couldn't use the cameras somehow in creating Mii characters. I thought it might be fun to include a function that would let you take a face-shot of the person for whom you wanted to make a Mii character, then create the Mii character yourself while looking at that photo. 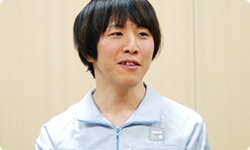 So, we got the specs nailed down, and one day I went to describe it to Miyamoto-san. Then he said, "It's too bad you can't have it automatically make them from the photos."

Sort of under his breath.

Yes, under his breath. (laughs) After that, I explored several different directions, trying to see if we could systemise the technical know-how of a skilled portrait artist. I was having a hard time with it, but as it happened, a certain company brought in a system that automatically created portraits. The timing was terrific. I liked the feel of the system, so we put it into the Nintendo 3DS system and tested it. Then we discovered that it took twenty or thirty seconds to automatically make a Mii character. Some people wondered if it was a good idea to make players wait that long.

Normally, when a computer program involves wait-time, a progress bar is displayed, but you managed to use that wait-time to good effect.

I think we did. A progress bar would have been boring. We and the other company both did our best, but no matter what we did, it was going to take a certain amount of time. So I threw the task to the lead designer by saying something like, “I’ll leave it with you, so please do your best to make the wait-time interesting somehow,” and he worked really hard and gave us this little skit of a Mii character flailing around inside a box.

I really love that skit. (laughs)

The lead designer kept tinkering with it for us up until the very last minute. (laughs)

I think the impression players get changes drastically depending on whether or not a skit like that is included.

Well, since we're talking about Mii characters, I'd like to hear about StreetPass Mii Plaza.

When you first heard, "It would be fun if we can use the StreetPass function with Mii characters," what was it that made you think about what would make it fun, and then create StreetPass Mii Plaza?

Normally, the fun thing about Mii characters is that they're portraits of someone you know, turned into characters and moving around. Mii characters that show up via StreetPass will be strangers, though. So at first, I thought it would be hard to really have fun with all these Mii characters you didn't know.

If the person you have StreetPass with just happened to be someone famous, I think players would probably be overjoyed, but yes, most of the people would just be strangers.

Right. So that was a bit of a problem, and what we came up with was the idea of putting something in the software that would give you benefits the more people you had StreetPass with. 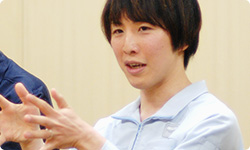 I see, so you got the ideas from the function. And what shape did those end up taking?

There are two games in StreetPass Mii Plaza. One of them is something called Puzzle Swap; in it, the more people you have StreetPass with, the more picture pieces you get, and you're ultimately able to complete a 3D picture.

If you have StreetPass with the same person several times, does something good happen then, too?

That's the other game, StreetPass Quest. It's a little like an RPG, where you've been trapped by someone, and a hero (someone else's Mii character) comes to save you via StreetPass. In this one, a Mii character who's come through five StreetPass communications is promoted to Level Five, and becomes five times stronger than normal.

So even if the Mii character belongs to a complete stranger, if you have StreetPass with the person several times, it will show up as a strong ally.

That's right. Even if you don't know the person, if you run into them all the time, you get more and more attached to them. (laughs)

You'd think, "Oh, I'm so glad I had StreetPass with you again!" (laughs)

Yes. We made it so that having StreetPass with the same person many times really works in your favour.