4. Pay Attention to the Battery Cover

Now I’d like to ask about the cameras. We talked in Iwata Asks: Nintendo 3DS about how two cameras were necessary because the Nintendo 3DS system would have a 3D LCD, but putting in two cameras wasn’t exactly easy, was it?

No. If you don’t align the two cameras with precision, the field angle will be off.

If you don’t align them so they are pointing in exactly the same direction, the photo might not look 3D.

No. We had to mount the camera modules parallel, without any rotation.

Early in development, the cameras were the hottest topic. Everyone wondered how you could mount two cameras with such precision. After installing them, we had to make sure impact wouldn’t alter them.

They would, of course, have been able to take 3D photos when they shipped, but we had to make it so that after a consumer bought one, if he or she dropped it, the impact wouldn’t cause the cameras to fall out of alignment, and doing that was difficult.

Right. We tried a ton of ways to reinforce them. For example, if we reinforced them too much with metal, it would interfere with the FPC wiring and cut it, which was yet another problem.

FPC stands for flexible printed circuit. It’s a thin cable like a band with wiring.

Yes. It’s thin, so it’s easy to cut. If I think about it now, that was the biggest challenge early on in development. Lots of people from all the related departments gathered repeatedly to discuss it.

When it comes to FPC, there are two cameras, so three FPCs pass through the hinge.

Three?! I think the first Nintendo DS system only had one.

That’s right. The Nintendo DSi system had cameras, so there were two, but this time, in addition to two cameras and the LCDs, there’s the LED lights and 3D depth slider, so there’s three.

I was still in the Product Engineering Department then, but if you think about mass production, passing three FPCs through a hinge should be difficult. It was hard enough just passing two through for the Nintendo DSi system. So I said, “You can’t do that.”

When you saw the design, you said, “That’s impossible!” and with regard to passing three FPCs through the hinge, you said, “You can’t do that.” (laughs) 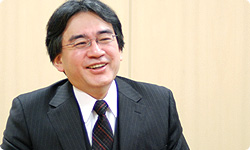 Yeah. (laughs) It turned into a big debate, so we decided to try making it. And it went off without a hitch! (laughs)

We had a collaborative company assemble it, and it went surprisingly well.

Sometimes the biggest problem is just thinking something won’t work.

That’s right. Sometimes before we even start working, we think, “It can’t be done.”

You tried a lot with regard to the upper layer and the cameras and hinge. What else was a challenge, Goto-san?

For me, I think it was the IML (in-mould labelling) used in places like the battery cover and buttons.

Many people probably haven’t heard of IML. Could you tell us a little about what it is?

Usually when you manufacture a product, you just pour resin into a mould and let it solidify. IML is a technology in which you place film on one side and cast the resin at the same time. 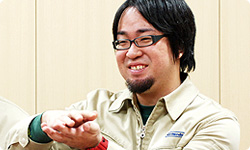 You cast the film and resin as one, so if you use pre-printed film, you can show the designs and letters clearly.

What is the advantage of using IML over printing after you shape the resin?

If you just shape the resin, sink marks can appear where there are changes in thickness. Sink marks are like little depressions in the surface. But when you use IML, those are less likely to occur. There are usually lots of processes in manufacturing, such as painting, printing, applying a top coat and so on, but IML has the merit of requiring fewer steps.

This time, the battery cover is the entire bottom surface.

In the Nintendo DS series so far, the cover was only over the exact spot where the battery was.

Right. But this time it’s the whole surface, so it looks much cleaner. There was a lot of trial and error of course - for example, when you apply the film and shape the resin together, once the resin starts to harden...

Right, it shrinks! Which pulls the film and it warps. So we performed a number of tests, changed the design, and settled on specs so it would be flat even after being fixed to the system. We asked a lot from our collaborator who did the IML in having them cooperate with the testing. We went through that process of trial and error, but after events like last year’s E39 and the Nintendo Conference10, no one in the media paid the slightest bit of attention! (laughs) 9E3 (Electronic Entertainment Expo): A video game-related trade show usually held in Los Angeles. In 2010, the expo was held in June. 10Nintendo Conference 2010: An exhibition for professionals in the gaming industry held at Makuhari Messe on September 29, 2010.

At E3 and the hands-on events, the systems were secured in the back to a locking device, so...

So you can’t see the battery cover.

And when I held up the Nintendo 3DS system on stage at E3, I only showed the screens.

I was secretly hoping you’d show the back! (laughs)

Oh? (laughs) Ehara-san, why did you want to make the battery cover be the whole bottom surface?

Most advertisements for handheld game systems show them from the front, but in daily life, when someone is playing on the train for example, we usually see the back. Especially for Nintendo 3DS, when you saw someone playing, I wanted you to think, “What is that? What’s going on on the other side?” 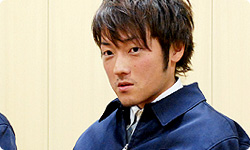 I see. You designed it with how it will look to others in mind.

Yes. With regard to the battery cover as well.

So that’s why we want people to pay attention to the battery cover! (laughs)

You also used IML for the buttons.

Right. The system looks metallic, so I wanted to give the buttons the same texture. There are lots of buttons for new functions this time, so by having the conventional buttons blend in with the system, I wanted the new features like the Circle Pad to stand out. And I thought people of all ages would use it, so we printed the letters clearly, like “A” and “B,” in order to improve readability.

It’s possible to create metallic buttons by adding metal powder in the resin, but the texture didn’t fit as well as I thought it would and there was a problem with the lifespan of the mould. The whole time I had thought it would be great if we could use IML for the buttons, too. But I didn’t think we would make such extensive use of it. It’s especially difficult to use IML for the +Control Pad.

That’s right. In IML, the film lengthens and shortens, and wrinkles often form.

For something flat it’s okay, but the +Control Pad is a difficult shape.

The edges are sharp, so we had some issues. Like the film breaking.

The +Control Pad isn’t the right shape for shaping together with film.

But our collaborator worked hard on it.

So when someone who knows a thing or two sees it, they’ll think, “Whoa!”

Yes. Unlike previous systems in the Nintendo DS series, the buttons have a metallic feeling, so it feels quite high-quality.