What is crucial to the Tales series that simply cannot be dispensed with?

They are games with a story in which players enjoy playing a character, so, for example, we never say, “This is the bad guy.” In the end, the party of protagonists battles those seeking to plunge the world into crisis, but…

So in that respect, there is good and evil.

But the bad guys don’t have a completely evil heart. They have their own reasons for what they do. They think, “We have to do something about the way the world is.” The protagonists, however, think, “No, that isn’t right,” so their views are opposed. We try not to make it one-sided.

One characteristic is you try to present a different world from the one in which there is clear good and evil and in the end you defeat evil and justice triumphs.

Otherwise, it wouldn’t be realistic. There are conflicts all over the world, and each side thinks it is right. It just may be that the bad are deemed bad simply because the person with the loudest voice said so.

History is written by winners, so the side that wins says the other side was evil.

Do you use that expression often?

Not often, but that’s how I think about it. We call them RPGs so the players understand it, and we label the genre a “such-and-such RPG” each time, but the point is that they are not your everyday RPG. 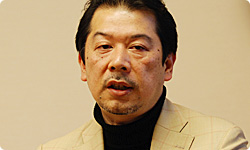 You call them RPGs to avoid confusion, but they are subtly different.

I sort of feel like, “Everyone may all think they’re RPGs, but sorry, they’re not really.” (laughs) We also try to portray attractive characters, as well as a realistic world, so it doesn’t come across as a mere fairy tale. We’re careful about the dialogue, and make the characters feel modern and the ways they think seem current.

What kind of RPG is Tales of the Abyss?

An “RPG of Discovering the Meaning of Life.” The theme is searching for yourself. As a game that originally came out in 2005, it marked the tenth anniversary of the series, so it was a milestone at which we tried what we hadn’t been able to do before. For the first time in the series, we developed the scenario wondering if we could have a really selfish protagonist and if we could structure it so the players would stick with it to the end even if they didn’t like the protagonist.

The main character, Luke, is a spoiled brat from a good family. He’s got money and status and he grew up getting everything he wanted, so he’s totally incapable once he’s out on his own. Along the way, he falls under criticism because one of his mistakes causes something awful to happen, but he just fires back, “It’s not my fault!” Everyone else in the five-person party says he’s no good. He wakes up eventually, and starts changing.

If players have to play that kind of character, I suppose they might take it as a reason to not like him. 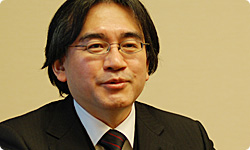 Yeah. I thought the players might want to lay down their controllers at that point. But you experience him changing, and see why he is like that, so it was a huge gamble. I said, “We can reverse the way the players feel later on.”

You released it, holding your breath over how the fans would react.

Yes. But in the end, many people played it through to the end and said it was great. What I was trying to say was that we should abandon the whole formula of heroes born with a destiny, growing up correctly and eventually defeating the king of all evil.

Right. This may just be my own peculiar self-consciousness, but if that’s all games are, then people will make fun of them. Even children enjoy more complex worldviews in movies and books, but if video games simply do the expected, what’s the point? So I made everyone have their own way of thinking, like by making a weird protagonist or a party in which no one is a good person. (laughs)

It’s noticeable how from start to finish they aren’t simply a group of do-gooders.

Right. Rather, from start to finish, each person has his or her own ulterior motives. (laughs) 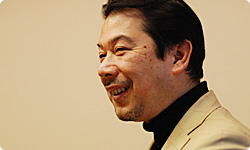 Nonetheless, they save the world.

Yes, that they do. (laughs) They’re not all good people. But isn’t that like reality? The world of Tales from the Abyss is full of characters that are smart but play dumb, or act cute but actually have ties to the enemy.

They each move according to their own thoughts and reasons, but in the end, they make choices and journey together with Luke. The players see Luke grow and then they think, “Oh, Luke isn’t so bad after all.” I want players to sense that kind of legend or fairy tale in the game.