I’m visited by these two from NAMCO BANDAI Games1 who worked on the Tekken 3D: Prime Edition game. Thank you for coming over. It’s nice to see you today. 1 NAMCO BANDAI Games Inc.: A company established when management of BANDAI Co., Ltd. and NAMCO Ltd. integrated in 2006. Headquarters: Shinagawa Ward, Tokyo.

Now then, if you could introduce yourselves, I’d like to ask how each of you became involved in video games.

No, I’m sure you were involved with video games before they became your jobs, so I would love to hear about that, too.

Got it. I’m Katsuhiro Harada, producer of the Tekken2 series. When I was a kid, my relative’s coffee shop had the Space Invaders3 game and ever since then I’ve loved video games. My parents were really strict and they told me, “We forbid you to play any video games!” 2 Tekken: A fighting game series. The first game in the series was released in 1994 as an arcade game by NAMCO Ltd. 3 Space Invaders: An arcade game released in 1978. 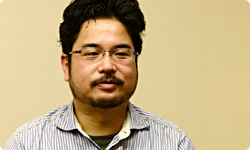 I’m sure your parents never dreamed that in the future

Video: you would shove yourself head-first into a skyscraper and face off

I’m visited by these two from NAMCO BANDAI Games 1 who worked on the Tekken 3D: Prime Edition game. Thank you for coming over. It’s nice to see you today. 1 NAMCO BANDAI Games Inc.: A company established when management of BANDAI Co., Ltd.
you would shove yourself head-first into a skyscraper and face off with (Yoshinori) Ono-san!4 (laughs) 4 Yoshinori Ono: Producer of the Street Fighter series. Deputy Head of Consumer Games R&D Division and General Manager of R&D Tokyo Production Department at CAPCOM Co., Ltd. In the past, he appeared in the Iwata Asks: Nintendo 3DS Third Party Game Developers.
Harada:

No. (laughs) They wouldn’t buy me a Nintendo Entertainment System, so I had to play at a friend’s house or sneak into a game arcade to play. So in reaction to that, when it came time to get a job I decided, “I’m going into the game industry no matter what!” My parents cried over it.

Generation-wise, was it still back when most parents would be against their children working in the video game industry? 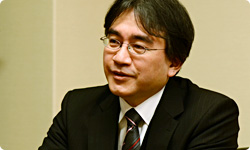 I was born in the seventies, and for my parents’ generation, the game industry was a totally unknown quantity.

What did you study in college?

I studied psychology, so it had nothing to do with the video game industry. I just happened to get my first job offer from Namco. At first I wasn’t involved in making games, I was in sales.

So you started off in sales.

That’s right. I actually never even thought, “I want to make games.” My head was filled with imaginary thoughts like, “How much fun would it be and how much freedom would I have if I could make my living playing games?” (laughs) I thought about what would be the best way to get lots of people involved in playing games, and I decided to work in sales and do video game events.

That may have been a reaction towards your parents not sharing your idea of how much fun video games can be.

That’s right! Actually, it was a reaction to that! I think that a part of the passion that I feel for games is a reaction to something or a rebellion. 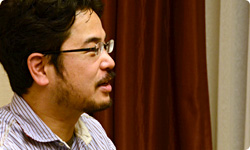 So your first job in sales was managing an event.

Yes. I worked as an employee in a game arcade run by NAMCO, and gathered customers together for game tournaments, like the Street Fighter5 game tournament. With arcade games you can see the customer’s reactions up close, so that helped me rack up experience points. After a while, I started to think “If it were me, I’d do this...” which led me to go to R&D, where I’d suggest things to them. 5 Street Fighter: A fighting game series. The first game in the series was released by CAPCOM Co., Ltd. as an arcade game in 1987.

They just let you do that from the beginning?

No, I really wasn’t supposed to do that. But it was only my first year out of school and I didn’t know anything, so my second month working there I just went into the development building.

What? Really? Security in places like the development group’s offices is very strict, right?

Yes, I waited outside the bathroom until the security door would open! (laughs) At first everyone was like “Who’s that guy?” but I kept doing that several days a week, and I guess they assumed that I had permission to be there.

Well, from the viewpoint of a developer, it’s always great to have someone come by who has information from the front line, so to speak. But I have to say, what an interesting way of breaking the rules! (laughs) When did you go over to making video games?

In the April of my second year there. I was doing events that involved me wearing a costume and doing funny things, and I got the company president award during my first year in sales. So I told the company president in person, “By the way, I want to transfer to another department...” (laughs) Everyone else was saying, “Hey, hey! Wait!” But I figured, “If I ask the president, maybe that’ll work.” So then I ended up transferring to R&D in April.

Wow, the way you just ignore the system is fascinating. (laughs). But all the people who dealt with you must have really understood that what you wanted was for people to understand video games better. 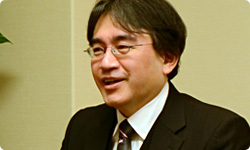 Maybe so. The thing I focused on the most was that there was a limit to what I could do alone in showing people how great games are. At the time there wasn’t any Internet, so it was hard to get word-of-mouth out, and Japanese people are so easily embarrassed that even in a game arcade, strangers don’t have conversations.

Back in the days when player-to-player fighting games were huge, they all just fought in silence.

Yes. I wanted to do something about that at the time. So what I envisaged was...You know how at school, if there is one funny guy, he becomes a topic of conversation? I wanted to use that method of communication for games, so I would wear a costume and wig at events and became an MC. Then everyone would start to chat about me, and they even started cheering during games and events. Although when my parents saw their son in his first year as a working member of society looking like that, they cried out loud! (laughs)

You put into practice the idea that if everyone looked at you and started having a conversation, it would change how they enjoyed the game. 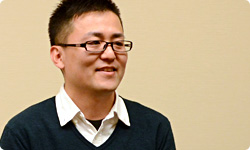 That’s my basic way of thinking. As they often say, the most important thing isn’t just making something good, but getting it across. I wanted to show my strict parents, “Look how much fun all these people are having playing video games.”

After you’d transferred to R&D, what exchanges did you have before people in R&D would accept you?

This happened because I didn’t read the atmosphere very well, but... my second day after transferring I went around to the leader of every section, without much introduction at all, saying, “You should make all the action games the way I tell you to.”

What? Even thought it was only your second year in the company and you’d just come to R&D?

Yes. I was suddenly a game director, so just thought that everyone would accept me. (laughs)

Ikeda-san, did you watch that happening?

No, back then I was working in video at another company, so I didn’t know about it. So when I heard that story after joining the company, I was shocked. (laughs)

I’ve talked with a lot of game developers, but that might be a first. (laughs) But even if you have an idea that something would be interesting, you don’t know if it can actually happen.

That’s true. So in my case, instead of passion, it’s more like “obsession.” At the beginning I made an effort to be the last one to leave the company every day. I wanted to show everyone around me that I spent over half my life at work. Which sounds silly talking about it now. But I tried to have that lend me credence when I talked to people. Even when we got about 6,000 postcards from readers, I finished reading them in two nights and made a chart out of it. 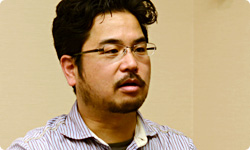 But don’t you think that rather than just trying to appeal to others within the team, you also couldn’t help analysing the reactions to your own output? There was a process that happened, where you saw how things were out on the floor with customers, and that worked as feedback for building your own idea of how things needed to be.

Yes, exactly. I was always interested in the customer’s feedback whether it was hearing it at the store or via questionnaires. That’s what I most wanted to know.