Finally, I’d like to ask the two of you about what you want NERD to do in the future, and about your goals and dreams.

We are geographically far away, and I think this gives us a kind of a special position within the Nintendo group.

You get Nintendo’s most confidential information on time.

Exactly. The developers at Nintendo headquarters need to spend their time developing the actual platform, so I think we’d like to explore areas that they don’t have time for. For example the possibilities which are opened up by the combination of cloud29 technologies and new software paradigms like general purpose GPU programming30.

I think we are now in exactly the right place to create the best new ideas, but we need to be very bold and ambitious to do so. That’s why I’m so glad I’m at NERD and not anywhere else.29. Cloud: A way of using computers where data such as photos or emails are stored online, and can be accessed from anywhere.30. General purpose GPU programming: A programming technology that utilises the strong processing power of a graphic processing unit (GPU) for purposes other than graphics. 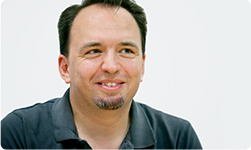 I think the first goal we have is to become a key element within the Nintendo group and to prove to Nintendo that it made the right decision by bringing us in. That’s why I want to make sure that the very ambitious projects we are currently working on are successful. We want to prove ourselves by accomplishing our goals with these projects. 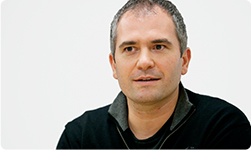 I think we’ve now got a place in Europe where some very talented people in a certain area can work to create things that will really surprise people, which is what Nintendo is always trying to do.

I think that now we will have to make the most of this opportunity that’s been created. Even though we are on opposite sides of the planet with such a time difference, there are still plenty of chances for us to work together on things. And actually we have already done this so many times during the development of Wii U. I think that in the future we will see more technologies being used that people recognise as having been created at NERD. Nintendo hasn’t really acquired companies in the past, but I think your work will prove to people why we did so on this occasion.

Nintendo didn’t just acquire a company, an empty box. By acquiring NERD we strengthened our relationship with the actual people working there. I hope that in the future, people everywhere will be talking about how various technologies came from NERD.

We’ll need to work hard and prove you right.

I think we’ve talked about pretty much everything I wanted to now. Is there anything else either of you would like to say?

I want to say that we have been constantly surprised by the welcoming and open-minded attitude from Nintendo ever since our very first contact. I’m always surprised how people are eager to work with us and to help us succeed with our projects. We are really thankful for that attitude from the people in Japan.

People who haven’t lived in Japan may not realise this, but Kyoto is a bit of a special place and Japanese people outside the city tend to think of companies in Kyoto as being somewhat unfriendly toward the people coming from other areas. But this is just a common misunderstanding. I feel that the Kyoto culture is actually very willing to adopt new things. There are plenty of people in Nintendo who are willing to accept it when they can’t do something and will eagerly welcome help from a team who can.

And we welcome the people from Kyoto to try some French food so that they can enjoy their time here. (laughs)

In this respect I guess there is an interesting kind of affinity between the Japanese and French cultures. They both have respect for each other. I was quite surprised when I went to see the Japan Expo31 this year. I wondered what country I had walked into. It was a real experience for me to see just how many people in France accept Japanese culture in this positive way. I hope we’ll be able to do lots of interesting and fun things together.31. Japan Expo: An exposition of Japanese entertainment and traditional arts. Held in Paris, France. 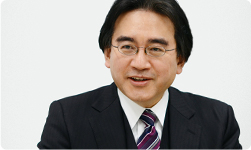