Today I'm here in Paris visiting a company called NERD1. The official name is “Nintendo European Research and Development SAS”, but we call it “NERD” for short. Perhaps, you may know the company by the name “Mobiclip”. Mobiclip and Nintendo have been working together for some time now, and in 2011 Mobiclip became part of the Nintendo group before changing its name only recently.

I’ll be asking the two people here who run the company a number of questions about topics including the background of NERD and how the company developed, the approaches of the engineers working at the company today, what kind of staff they are looking for, and what they want to achieve in the future.Could you start by introducing yourselves?1. Nintendo European Research and Development (NERD): A Nintendo subsidiary focused on software development and based in Paris, France. For more information, including job opportunities, please visit http://www.nerd.nintendo.com

My name is Alexandre Delattre. I’m Managing Director and Chief Technology Officer at NERD, and I’m also one of the co-founders. I manage the company and orient the research and development of the team. 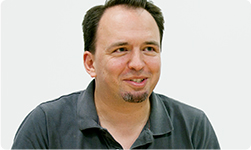 My name is Jérôme Larrieu. I’m Chief Science Officer and also a co-founder of the company. I do research as well as specialise in low-level optimisations2 and discovering new technologies. I’m one of the main contributors to NERD technologies.2. Low-level optimisation: To improve software speed by using programming languages that are close to the hardware level, which is considered the lowest level. 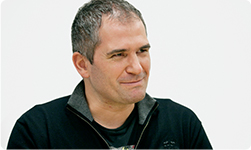 Chief Science Officer is quite a rare title. Could you explain a little about the position?

Basically, I’m working with Alex to define the strategy for the research and development area inside the company. I’m not working all the time in Paris with all the team, I’m doing development on specific and secret projects for the company. That’s why we had to find a title that was rather strange, or shall I say, specific.

The two of you also have a kind of mentor and disciple relationship, right?

It’s actually quite strange because Jérôme was my mentor. He’s the one who hired me into the video game industry.

Jérôme taught me a lot of things about research and shared lots of technological knowledge, but when Nintendo acquired Mobiclip he told me that it would be better for me to manage the company because of my communication skills. So even though he’s my mentor, I ended up as his manager.

I see, so it was kind of a quirk of fate that led to this situation at NERD.