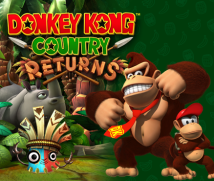 Editor’s note: This interview was conducted with help from a translator.

I’m Kynan Pearson. I’m a senior designer at Retro. I was in charge of designing levels for Donkey Kong Country Returns. 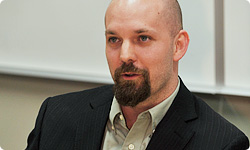 I’m Mike Wikan. I’m also a senior designer. I was in charge of the enemies and bosses in Donkey Kong Country Returns. 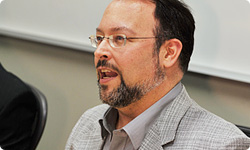 I’m Tom Ivey. I’m a senior designer, too. I designed the game mechanics. 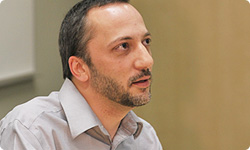 Now would you two from Nintendo please introduce yourselves?

Either way is fine. (laughs)

(in English) I’m Kensuke Tanabe. (switching back to Japanese) No, I’ll do it in Japanese. (laughs) I produced Donkey Kong Country Returns. 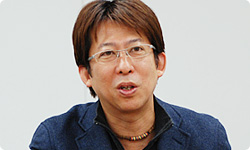 Will you give it a go in English, Tabata-san?

Shall I? (laughs) (facing the guests from Retro Studios on the monitor and speaking in English) Should I introduce myself in English to you? (in Japanese) Just joking. (laughs) I’m Risa Tabata. As assistant producer, I did various tasks. 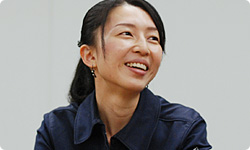 Gamers know Retro Studios as the company that made the Metroid Prime-Trilogy 2, but for a company like that to suddenly announce a new Donkey Kong game, kept secret until the 2010 E33, might have been surprising for some, so I’d like to begin by addressing the question of how it came about that Retro Studios would make Donkey Kong Country Returns. It’s probably a good idea to start with you on that, Tanabe-san. 2 Metroid Prime trilogy: Metroid Prime was a first-person action game released for the Nintendo GameCube in February 2003. Metroid Prime 2: Echoes was released for the GameCube in May 2005, and Metroid Prime 3: Corruption was released for the Wii console in March 2008. (These are the Japanese release dates. In Europe the games were released in March 2003, November 2004 and October 2007, respectively.) 3 E3 (Electronic Entertainment Expo): A video game-related trade show usually held in Los Angeles. Donkey Kong Country Returns was first announced at E3 in 2010.

Okay. I’ll never forget April 2008… I already talked about this around the time of E3 when we did a session of “Iwata Asks” for Donkey Kong Country Returns, but there was a bit of an incident when several of the core members at Retro Studios who had worked on the Metroid Prime series quit the company. I didn’t know what to do, but about that time, and totally by chance, Miyamoto-san said he wanted to make a new Donkey Kong Country 4 and asked if there were any good possible developers for it. I suggested Retro Studios, and that’s how this project began. 4 Donkey Kong Country: A side-scrolling action game released for the Super NES system in November 1994. In addition to three games that appeared for the Super NES, a version was also released for the Game Boy Advance.

To go into a little more detail about that, when talk came up of several key members from Retro Studios leaving the company, not a few people were skeptical about whether the company would be able to keep making high-quality games. In the end, Retro Studios totally dispelled all such concerns, but it must have been a challenge or hardship of sorts. You must have had to decide in a very short period of time what kind of role the new central developers would play and how you would pull the team together. What’s more, those people must have fallen under an enormous amount of pressure because they had to bear responsibility for leading others when they hadn’t proven themselves in that capacity yet. I would like it if you could tell us a little about what you at Retro Studios thought about that situation as it was unfolding.

Well… It was, of course, hard when a few key members who had worked on the Metroid Prime series left, but I knew it was also a chance to introduce new ways of thinking and operating.

Rather than viewing the project as hard, I was excited about this beautiful opportunity to work on an amazing title like Donkey Kong Country. At the same time, I felt a great sense of responsibility in that I didn’t want to disappoint the expectations of fans of Donkey Kong Country.

I felt a great sense of responsibility the way Mike did. But I’d worked together with these guys the whole time and I understood how they operated, so I wasn’t really worried. We bounced our thoughts off each other to come up with the best ideas - just as we always had - and the way the team bonded together worked out positively.

These three worked together so well on this project and pulled the whole thing together so nicely that it dispelled any doubts we had.

Retro Studios has a large number of experienced developers, and I think everyone was excited about participating in a project different from the series we had worked on up to that point.

Through our work on the Metroid Prime projects, everyone had sharpened their skills in their respective areas.

Compared to the serious atmosphere of Metroid Prime, Donkey Kong Country Returns is a really bright game, so rather than feeling uneasy about it, a bright atmosphere spread through the team.

At first you felt a certain hardship, but you thought the challenge of a new title like Donkey Kong Country was an excellent opportunity and the three of you pulled the team together.

Yeah, but to be honest…

Before this project began, we went to Kyoto and met you and Miyamoto-san and… man, were we nervous! (laughs) 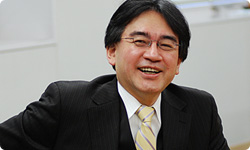 Yeah. (laughs) But at that first meeting, we got a glimpse of the direction we should take and also established a shared vision of the project, which drove away our unease. It really made an impression on me how happy you looked that day, Iwata-san! (laughs)

That was because I knew, due to what I had heard about you from Tanabe-san and what we had talked about that day, that I could count on your team to make the new Donkey Kong Country game. There are a number of reasons for that, but one is that so many of you had spent so much time playing Donkey Kong Country on the Super NES.

Yeah. A lot of our staff members are passionate about Donkey Kong Country.

They’re not just fans of it, they’re total masters! I was in charge of localisation of Donkey Kong Country for the Super NES, so I was confident in my skills, but they’re much better!

I was surprised when I heard that from you. That was really lucky, and I think it’s a big factor underlying why this project went so well. They knew the title well and were proud and happy to be involved with it, and that passion generated an energy that was poured into the game.

That’s right. When we met with you in Kyoto, we had quite a memorable conversation. You said this was a great opportunity, and that meant a good opportunity for us as Retro Studios as well as for all the fans who had been waiting for a new Donkey Kong Country game. Donkey Kong Country was already a beloved series, and I thought this was the perfect opportunity to incorporate our own ideas into it.

Kynan-san just mentioned what a “good opportunity” this was. At the first meeting, Iwata-san, you used the word “goen”. You said that you could sense great “goen” about this project. It’s difficult to fully translate “goen” into English, but Retro Studios decided on the translation “fate” and made “F8” the development code for Donkey Kong Country Returns. (“Goen” is a Japanese term that describes the unknown force that brings a person into contact with someone that is not previously a part of their life that will eventually make an important influence.)

We were meant to meet and make this game, and I, too, strongly feel that something like fate was at work there.