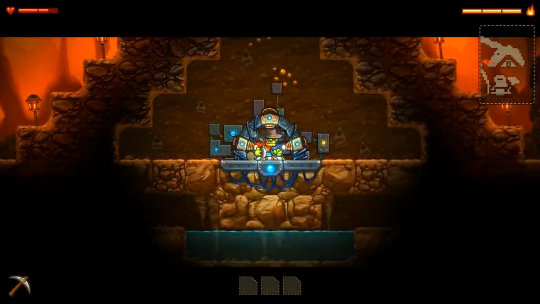 SteamWorld Dig is a platform mining adventure. Take the role of Rusty, a lone mining steambot, as he arrives at an old mining town in great need. Dig your way through the old earth, gaining riches while uncovering the ancient threat that lurks below...

Explore an underground world full of secrets, treasure and terrors, and uncover the remnants of human civilisation, a degenerate race of dynamite-wielding troglodytes.

Nintendo of Europe: First of all, please introduce yourselves and explain your roles on SteamWorld Dig for Wii U.

NoE: SteamWorld Dig launched on Nintendo 3DS and 2DS around a year ago now. For people who haven’t picked it up yet, or maybe aren’t aware of it, please can you give us a short introduction to SteamWorld Dig and what it is?

BS: Like you said, it’s been just over a year since release. We had some birthday cake last week in the office! SteamWorld Dig is a mining platform adventure, that’s what we like to call it. The objective is mining – it has platformer controls, and it’s story-based, so it is an adventure. You play this steam-driven robot in a sort of Western, steam punk-y setting. So it appeals to everybody! Everybody should get it!

NoE: For people who didn’t get it yet, what’s new in this Wii U version, or what’s interesting about it that would entice people to pick it up on Wii U?

OH: We worked really hard to make the game suitable for Wii U. So it’s got nice high definition graphics, and you can use the television screen, the Wii U GamePad screen, you can use both screens at once. We made sure that it works very well for Wii U. And there’s also some hidden fun stuff, some fun things!

OH: I can’t give all the secrets away!

NoE: Well, there were already quite a few references in the original version of SteamWorld Dig, so have you embellished that?

OH: Yeah, we had a little fun! But I think people will find it sooner or later. It’s a bit more hidden than the earlier secrets we added to the game.

OH: We’re not saying any more! That’s it!

NoE: You touched on the Wii U GamePad controls, and how you can use one screen or two. Can you explain more about how you play with both screens and what that brings to the experience?

OH: For the people who have played the Nintendo 3DS version, it’s basically the same: you get the map on the GamePad screen, and have more room for the inventory, and so on. So you really don’t have to see all that interface on the television screen, which frees up the screen. We think that’s really, really nice, because this is the only HD version of the game in which you can do that. So it looks really nice and clean on the television screen.

BS: Obviously it has off-TV play as well, so you can dance away with your GamePad and enjoy the game there.

OH: And we’re definitely having a Miiverse community where people will be able to write, and so on.

NoE: Speed runners will be happy about that!

BS: We think so! And just to touch on Miiverse, it’s been a huge surprise to us: how well it works, and how well the community attaches to it. We’re working really hard on social media to get as many followers as possible everywhere, and when we reached a milestone with 3,000 followers on Twitter, I was bragging to the people in the office about my hard work in getting that.

And then I told Agnes [Mikucka], one of our character designers, who is also in charge of the Miiverse community. She said, “oh, that’s great. I think we just passed nine or ten thousand on Miiverse!” “What?! You’re supposed to draw characters, not be on Miiverse the whole time!” She said, “they’re just coming!” People adhere to it so well.

OH: It’s so much fun to browse through Miiverse and see drawings of Rusty and all our characters. It’s a blast!

NoE: Thank you for your time!